Rugby union needs someone like John Singleton, a guy who can use his charisma, his contacts and his cachet  to help transform the code.

John Singleton is a glass-half-full man, although, if charged with helping resurrect Rugby Australia, the  78-year-old advertising genius could be excused for swigging straight from the bottle. 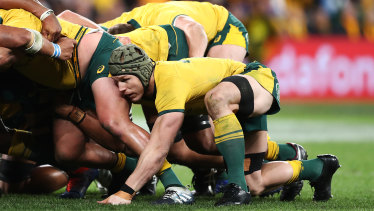 The Wallabies pack down a scrum against Samoa last year.Credit:Getty

If it’s hard to find a product that's more fun than football to sell, it would be harder still to find someone who has had more fun selling.

Here are his rule changes to revolutionise the sport:

1. One point for a penalty goal but three points for a goal kicked as a result of a penalty for foul play.

2. Conversions and field goals would be worth two points and tries seven points.

3. Only nine technical reasons why penalties can be awarded for breaches of scrums, lineouts, rucks and mauls, thus eliminating all those archaic rules produced by lawyers who like to sit around and debate how many angels can sit on the point of a pin.

4. Kicking out on the full in general play would be outlawed.

5. A team could have only five phases of the ball to gain ground. If not, they sacrifice possession. If they make “forward progress”, as Rex Mossop said, they hold the ball indefinitely.

“But the rule changes were undermined by having manufactured teams,” he said. “They looked like a whole lot of Northern Eagles teams running around,” referencing the failed merger, post the Super League war, of the North Sydney Bears and the Manly Sea Eagles, two clubs who loathed each other. 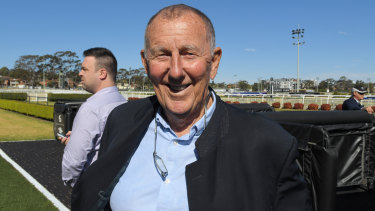 John Singleton has some ideas to improve rugby union.Credit:Simon Bullard

The Central Coast Rays won the inaugural and only championship, playing out of Singo’s Bluetongue Stadium at Gosford. “They were not permitted to seek the opportunity to defend their crown,” he said.

“Lucky I’ve got memories of Fort Street High School to fall back on,” he said, having once kicked a field goal and scored two tries on an inter-school visit to Lismore.

“The field goal was the pinnacle of my career.”

The ball did sail between the posts and the name of the kicker landed on the scoresheet page of the Northern Star which many believe was the motive for a three pointer, booted in the closing stages of the game.

Yet, with his piano key grin and looking like someone who hung out with Archie and Jughead from the popular comic strip, he won over the only girl who looked like Betty.

“Now, all Fort Street does is play table tennis,” he lamented. “Also got memories of Enfield Federals. Unbeaten for eight years. A nobody called Tim Pickup took my place.”

While it’s true that the older we get, the better we were, Singo succeeded in advertising. And, if Super Rugby is the shop front of the code, he saw problems it had in selling itself from the start.

“Is it 12 men aside, or 12 teams?”, he asked, when Super 12 started in 1996, a reasonable question considering the only other version of the 15-a-side game was Sevens, which means seven players.

He also questioned naming teams without any reference to their geography. “Are the Lions, Bulls, Highlanders and Chiefs, South African or New Zealand teams?” he wondered. If you are watching the Stormers versus the Hurricanes, will it be on shown on a weather map?

(The Melbourne Rebels, the losing grand final team to the Central Coast Rays in 2007, adhered to his philosophy that a team is meaningless without a place name).

But back to Singo’s suggested rule changes.

If you get three points for a penalty goal kicked as a result of foul play, what’s to stop a team doing all the nasty stuff only in the opposition quarter? Sure, the referee can send the player off, or penalise his team but the opposition can’t kick a goal.

“Do I tell a Tommy, or Dallas, or a Les Boyd only to commit mayhem well away from your own posts,” I ask.

“You got it,” he replied, knowing the rah-rahs need something to attract the leaguies.