The prognosis on Samu Kerevi’s ankle injury is not as bad as first feared, opening the door for the star centre to feature on the European leg of the spring tour.

Kerevi, who limped off the field in the second half of the Wallabies’ 32-17 win against Argentina at Cbus Super Stadium, was sent for scans on Sunday morning.

Those scans will be presented to the Wallabies medical staff on Monday but sources with knowledge of the situation have told the Herald the injury is not as bad as first feared.

Kerevi is believed to have suffered ligament damage, rather than a syndesmosis injury, which may only sideline the star centre for four weeks. 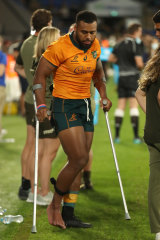 Samu Kerevi was a casualty of the Wallabies’ fourth straight win on Saturday night.Credit:Getty

If the scans confirm the prognosis, the Wallabies hope Kerevi will be available for the first European leg of the spring tour – against Scotland at Murrayfield on November 7.

If he doesn’t line up against Scotland, he will almost certainly be available against Eddie Jones’ England on November 13.

The news is significantly better than the Wallabies initially expected, and should allow coach Dave Rennie to pick his best XV against some of the best teams in the northern hemisphere.

Rennie has led the Wallabies to four consecutive wins for the first time since the 2017 spring tour, but the next six weeks will provide the best guide as to how far his side has come this season.

In the eyes of Rugby Australia chair Hamish McLennan, there is no coach he’d rather have leading the rise of the Wallabies.

“He’s everything that we could have hoped for,” McLennan said. “He’s incredibly decent, humble and knows how to get the best out of his players. While we’re at it, we should be offering him citizenship.”

The four straight wins have built the Wallabies a buffer in third on the World Rugby rankings, clear of England, and McLennan believes the resurgence wouldn’t have been possible without the RA board’s rugby committee.

The committee, consisting of RA chief executive Andy Marinos and RA board members, Phil Waugh and Daniel Herbert, have given the green light to tweaks to the Giteau Law and are attempting to rebuild rugby’s pathways from the ground up.

With the Wallabies improving on the field and McLennan and Marinos righting the ship off the field, the RA chair has turned his attention to one group he believes are hindering, not helping the code – player agents.

“We need to dig deep on that whole side of rugby,” McLennan said. “They have a role to play, but they’re not always acting in the best interest of their players.”

Meanwhile, the Wallabies have been given a week off after months on the road.

They will reconvene next week, before flying to Japan. The squad that will travel to Japan will be named in the coming days.

Stan Sport is the only place to watch the Wallabies v Japan – streaming ad-free, live and on-demand on Stan Sport on Saturday 23 October from 3:45pm AEST.

Tags: Kerevi’s, not, over, season, yet
You may also like
Latest Posts