Melbourne forward Maddy Guerin has become the latest Demon to require a knee reconstruction after she was hurt in a shock AFLW loss to St Kilda on Friday night.

Scans have confirmed Guerin ruptured her anterior cruciate ligament, the fourth Demon to have done so this season, and ninth across the league.  The Demons had initially hoped she had dislocated her kneecap. 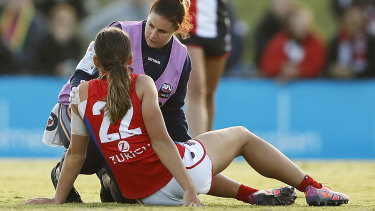 Toll rises: Maddy Guerin is the fourth Demon to rupture her ACLCredit:Getty Images

Guerin's injury impacted not only the Demons but her opponents, with Saints forward Kate McCarthy even asking at the time if the match should stopped.

“To be honest, personally I was a little bit shaken from that seeing that happen because there’s so many ACLs that happen in our game and it just didn’t look great,” McCarthy said post-match.

“You just feel for the player, regardless of what jersey they’re wearing, that’s a pretty tough injury to come back from.

“I was actually a little bit disappointed we didn’t stop the game because she was kind of in the middle of it.

“I was next to [Demons captain] Daisy [Pearce] actually and I was like: ‘Do we need to stop?’ And she said: 'You’ve just got to keep going'. It’s not nice to see anyone go down like that.”

The Demons also lost Irish rookie Sinead Goldrick to concussion in the second quarter, leaving her in doubt for Friday night's clash against Collingwood at Marvel Stadium.

The Saints, in their maiden AFLW season and $101 with bookies to win the flag, stunned the Demons, who had emerged as a premiership favourite after their round 2 win over the Western Bulldogs.

Demons coach Mick Stinear was left to lament wasted opportunities in front of goal on a night his team was beaten 3.1 (19) to 1.8 (14).

Tags: AFLW, as, fo, in, Knee, mounts, toll
You may also like
Latest Posts