The Newcastle Knights have offered Kalyn Ponga a four year, $4.5 million deal which is believed to include an option in his favour that would allow the superstar fullback to play for the All Blacks at the 2023 Rugby World Cup.

Knights chief executive Philip Gardner confirmed to the Herald that negotiations are under way to turn Ponga into the game's next million-dollar player and one of the five highest-paid players in the history of the sport. 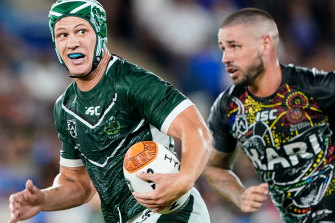 Kalyn Ponga represented the Maori All Stars on the weekend and has spoken of his desire to play for the All Blacks.Credit:AAP

Sources close to the deal told the Herald the final year of the revised offer (2023) will be an option in Ponga’s favour to allow him the flexibility should he decide to test his hand at rugby at the 2023 World Cup in France.

The club’s original intentions were to keep Ponga, who lived in New Zealand with his family for five years from the age of eight, until 2025.

However, the club is well aware of the threat rugby, and in particularly the All Blacks, pose in the pursuit of their fullback.

"I'd be really surprised if the All Blacks weren't talking to him now, that's the kind of talent we are talking about here," Gardner said.

"He could play for the All Blacks, the Wallabies, or he may end up going to Japan or Europe. We genuinely want the best for the young man and while ever he wants to play rugby league, we want him to play here at Newcastle in an environment he enjoys.

The Knights have been desperate to extend Ponga's deal for the past 12 months but hit roadblocks with his former agent Wayde Rushton.

Discussions have ramped up since Ponga split with Rushton, who also lost Latrell Mitchell as a client at around the same time, with Ponga's father Andre taking charge of negotiations in January.

Given Ponga's current deal is an option in his favour for 2022, the Knights are also well aware that rival NRL clubs can secure his services at the end of this rugby league calendar year.

"We're talking to him now because the reality is that KP's a free agent on the 1st of November," Gardner said.

"What does he want to do in the years ahead? Well that's up to him. We want him here as long as he wants to be here."

Ponga, who has previously expressed his desire to one day represent the All Blacks, is regarded as one of the biggest names in the NRL and if he was to leave the code it could rank alongside Sonny Bill Williams as the sport's biggest loss.

Recovering Raquel Clark has her comeback bid delayed by COVID

Fantasy Injury Updates: Todd Gurley, David Johnson, Myles Gaskin, more RBs impacting Week 13 waiver wire pickups
Recent Posts
This website uses cookies to improve your user experience and to provide you with advertisements that are relevant to your interests. By continuing to browse the site you are agreeing to our use of cookies.Ok