Star Geelong forward Jeremy Cameron has declared the Cats are ready to better handle the pressure and galvanise as a unit with their season on the brink in Friday night’s semi-final against Greater Western Sydney.

Cameron will play against his former club for the first time, having missed the round 21 loss because of a hamstring injury, and says the Cats have worked diligently at training in Perth after a stinging loss to Port Adelaide in week one of the finals. 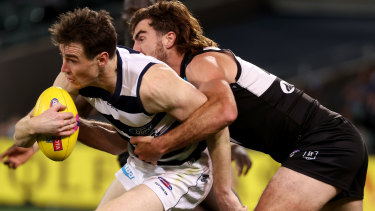 The Cats were criticised for their inability to deal with a Power surge – they had 25 turnovers in their defensive half, having averaged 18.6 through the home-and-away season, while their ball use heading forward was too often curtailed by All-Australian Aliir Aliir.

The Giants’ Sam Taylor will look to have a similar intercept-marking role at Optus Stadium this week, and the Cats have spoken about the need to be more composed. 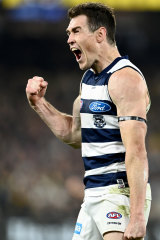 Jeremy Cameron will look to stand tall against his former side in a knockout final.Credit:Getty Images

“When it’s an elimination and you either win it and go through, or you lose and you go home, there is a lot on the line,” Cameron said on Tuesday.

“I think it brings the best out of a lot of guys. Myself, when your back is up against the wall, that is when you seem to want to play your best football and you really knuckle down and galvanise. We are looking forward to that.”

The Cats’ patient, methodical ball use from defensive 50 was picked apart by the Power. While Cameron said the Cats had worked on their ball use this week, he said mindset was also important.

“We acknowledged early on that we brought on a lot of that pressure, ourselves. Clearly, Port came with a lot of intensity, a lot of pressure, and really got on top of us throughout certain stages of the game,” he said.

“We made some simple errors that brought that on. We dropped marks, we fumbled, we weren’t as clean as we would like to be. We needed to sharpen up on that. It can be a bit of a mindset thing as well. You improve on that, it’s amazing how everything seems to flow on the back of it.”

Cameron said he looked forward to the on-field banter against teammates he played alongside for nine seasons, although the suspended Toby Greene won’t be one, and has already received a “cheeky” message from Steve Johnson, now a Giants assistant coach.

“It’s going to be very interesting. I am sure there will be a few words said out on the field, but it’s all part of it. It adds to the excitement,” he said.

Cameron’s best response will be on the scoreboard. The Cats managed only five goals and were held to their lowest score of the year (43 points) by the Power, with Cameron contributing only one major.

As a former Giants best and fairest winner and the leading goal-kicker in the club’s history, he now has the chance to end his former club’s season, while showing why he was seen as a missing piece in the Cats’ quest for a second flag in the Chris Scott era.

“I clearly missed that (match against the Giants) three or four weeks ago … I am just excited to be going back out there. I am keen for a big performance,” Cameron said.

Tags: Cameron, Cats, enemy:, know, thy
You may also like
Latest Posts