The day brutal Boks SHAMED rugby: Corne Krige was the South African hitman during ’80 minutes of absolute thuggery’ – with flying elbows, stamping and headbutts – against England at Twickenham in 2002

It remains England’s record victory over South Africa and one of — if not the most — brutal games ever to have taken place on the hallowed Twickenham turf.

For everyone connected with the Springboks, their 53-3 defeat at the home of English rugby in 2002 will always be remembered as a day of shame, not just for the result but for the reprehensible approach taken by their team.

Thuggery, cheap shots and over-the-top physicality were the order of the day. Led by their captain Corne Krige, South Africa set out to unsettle England with brute force. 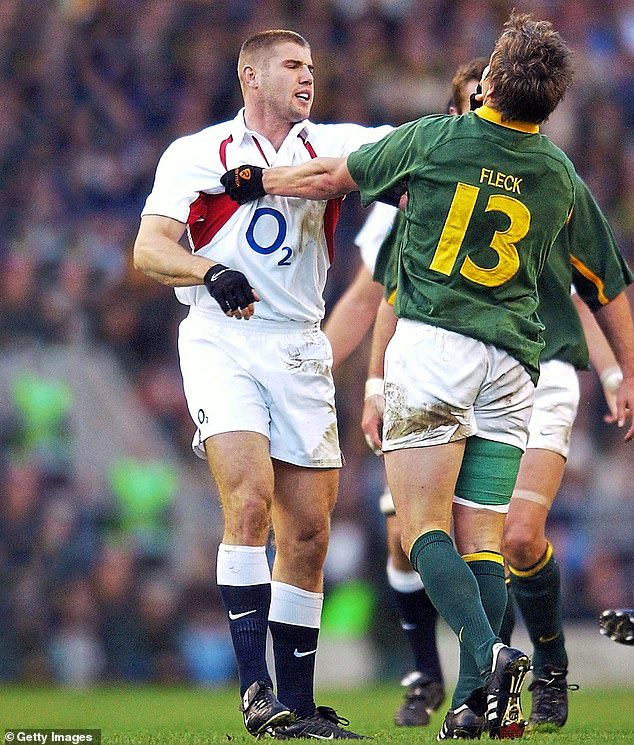 Not only did it fail, the Springbok approach also tainted the legacy of a proud nation. Even now, 20 years on and as the two sides prepare to meet again on Saturday, the 80 minutes isn’t easily forgotten by those who took to the field that day.

For Krige, it remains a huge source of regret. ‘There are lots of memories from that day I’d like to forget,’ Krige told Sportsmail. ‘They still stick with me. A lot went down that day. A lot of the actions I’m not proud of as a Springbok captain. What happens in the heat of battle sometimes makes people lose their head and I did that day. I’m not proud of it.’

Krige played the role of lead villain and hitman for South Africa. His reckless swinging arm on Matt Dawson nearly took the England scrum-half’s head from his shoulders. Krige also stamped recklessly on prop Phil Vickery in the same play after the whistle had gone.

Jannes Labuschagne was sent off for a reckless, late tackle on Jonny Wilkinson

In a pitiful attempt to beat Sir Clive Woodward’s England, who became world champions the following year, Krige and South Africa lost control. Their approach could be best summed up as calculated violence.

‘South Africa were just intent on maiming somebody,’ said former England back Jason Robinson, who wore the No 15 shirt in 2002. ‘That’s why it was such a big score. Their focus was on hurting us, not on playing the game. There was all sorts going on — headbutts, elbows, booting, the lot.’

South Africa arrived at Twickenham two decades ago beset by injuries and on the back of defeats by France and Scotland. England, under Woodward, were flying high.

The contrast couldn’t have been bigger. To try to bridge the gap, South Africa attempted to unsettle England physically, but not within the laws of the game.

Referee Paddy O’Brien sent off Springbok second-row Jannes Labuschagne for a reckless, late tackle on Jonny Wilkinson. Frankly, Krige should have followed him in seeing red.

‘I wish we’d done things differently,’ said Krige. ‘It wasn’t the plan from the beginning. As we got further and further into the game, the plan changed in my mind. I’ve apologised many times. It’s 20 years ago now which is quite a long time. Over time you learn to forgive yourself and also that other people forgive.

‘Luckily, time is a healer and you begin to accept it. A red card didn’t help us and it went from there. There aren’t great memories of Twickenham for me.’ 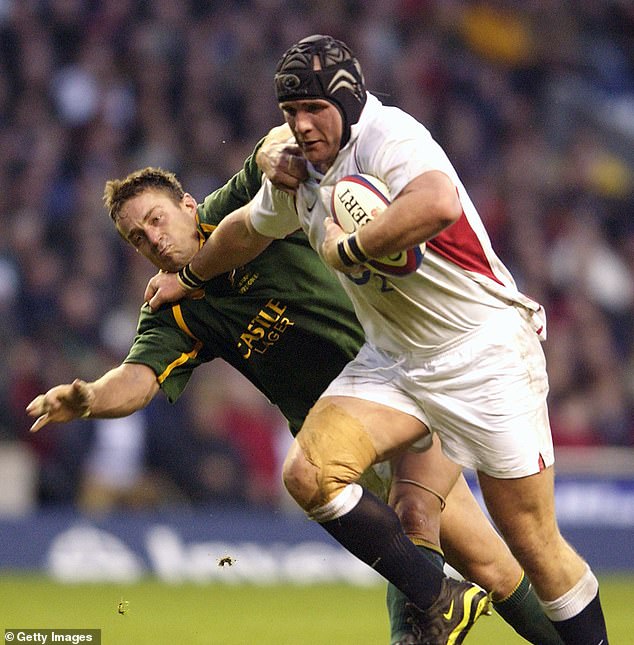 Krige landed punches on Robinson, Wilkinson and Lawrence Dallaglio plus a flying headbutt on Dawson. His team-mates were also at it.

South Africa targeted England’s players off the ball and got away with most of the dirty tricks.

‘It was probably one of the most violent games I’ve ever been in,’ said Robinson with a smile. ‘Clive put a video together of all the incidents. You know certain things are happening when you’re playing, but when that video was put together, it made you realise how bad it had been.

‘The way to respond was to put a high score against them and that’s what we did. I’ve always seen South Africa as the most physical team in rugby. They’re physical enough without crossing the line,’ Robinson added. 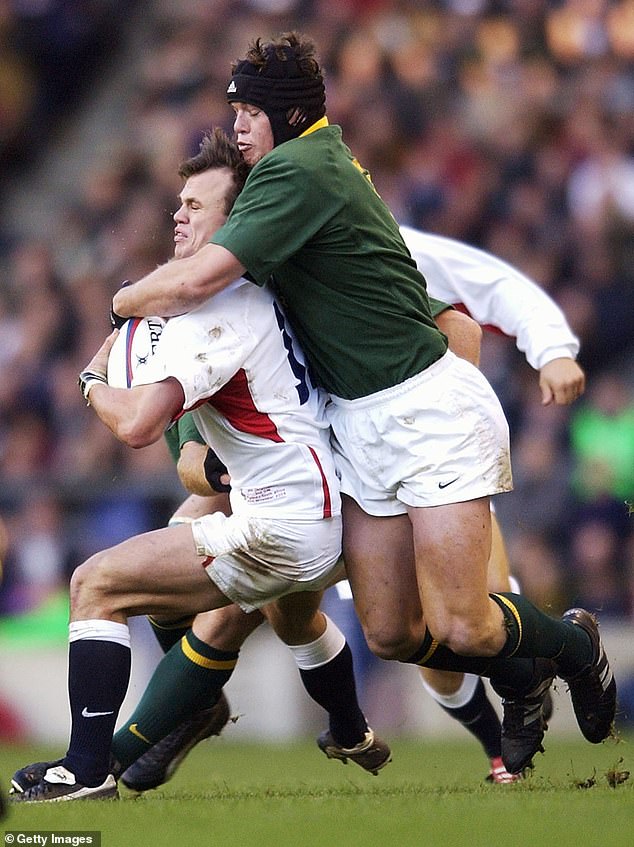 ‘That 2002 game was a disappointment. It was one thing after another. The days of that sort of stuff are long gone, thankfully. If I had wanted to have played like that I would have taken up mixed martial arts or boxing!’

England paid the price physically for South Africa’s assault. Star fly-half Wilkinson was forced off after being battered into submission. Wilkinson, Robinson, Dawson and Phil Christophers all suffered head knocks. Despite that, Woodward’s side still played some brilliant rugby.

They scored seven tries, with Ben Cohen and Will Greenwood producing trademark efforts. There was also a penalty try after Christophers was wiped out with a high tackle.

After the reckless display from his team, then-Springbok head coach Rudolf Straeuli somehow tried to defend his side’s approach. ‘We are a physical side and so are they,’ Straeuli said. ‘Two of our players came off concussed. Do you think we gave ourselves concussion?’

The irony for Straeuli and South Africa is that is exactly what had happened.

As Krige attempted to wipe out Dawson, he made contact with team-mate Andre Pretorius — who was forced off. It summed up a shameful day for South African rugby, one which still haunts those involved.