A landmark loan deal between the Tigers and Storm is back on the table after months of negotiations hit a standstill due to contract complications.

The swap between highly-rated Storm hooker Harry Grant and Tigers back Paul Momirovski hit a major snag in February as both parties closed in on sealing the deal. 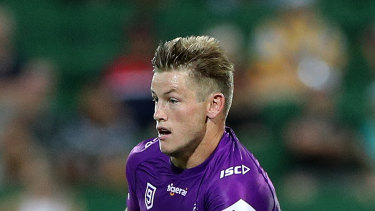 Melbourne’s Harry Grant requested a release from the Storm.Credit:AAP

Those complications were on Melbourne's end, relating to the release and eventual return of Grant – who has since asked for a release from the Storm – and the salary cap implications of doing so.

Both clubs had told the players involved the deal was done, only for the NRL to argue the Storm's acquisition of Momirovski would push them over the edge of the salary cap.

But the passing of the March 1 deadline has meant there is now more wiggle room in Melbourne's cap, allowing talks to start again.

Tigers sources have told the Herald they were always hopeful of securing Grant at some point during the season – making the point that an early injury to one of Billy Walters or Josh Reynolds would leave the club mighty short in hooker stocks.

But the club is also sceptical the Storm will release Grant, given they are short on cover for Cam Smith after Brandon Smith suffered a facial fracture in the early part of the All Stars game on the Gold Coast a fortnight ago.

Smith isn't expected to return until between round two and four. After that, the club are more likely to consider releasing Grant.

Both Grant and Momirovski are still keen to make the move for the upcoming season.

Momirovski is likely to earn solid minutes at either club but Grant would likely need an injury or significant suspension to Cam Smith if he is to play a stretch of games for the Storm.

Tags: between, deal, Landmark, loan, Sto
You may also like
Latest Posts