Collingwood coach Nathan Buckley says “the hit-out stat is a furphy” after the Magpies won the count 63-4 but still lost to the Brisbane Lions at Marvel Stadium on Thursday night.

Despite the tap dominance of All-Australian Brodie Grundy up against the inexperienced pairing of Connor Ballenden and Tom Fullarton, the Pies only had a modest victory in stoppage clearances (24-17) and lost the centre clearances 13-11 on a night they were sunk by Zac Bailey’s set shot after the siren. 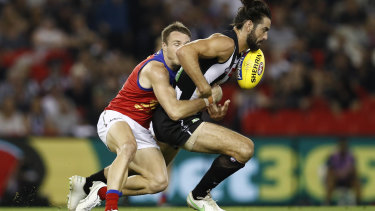 Clearly irked by the ongoing focus on Grundy, who starred with 28 disposals to go with his hit-outs, Buckley said after the game that the focus on the statistic was way over the top.

“And when you know you’re going to lose the hit-outs, you can actually set up pretty well at ground level to be able to buffer that. That’s what sides without a dominant ruckman do. Brodie’s not just a hit-outs ruckman, he follows up, he’s a midfielder and that’s what he provides to us. He played particularly well. The hit-out differential is largely irrelevant, it’s what we do at ground level with that. He still had hit-outs to advantage but the hit-out stat is a furphy.

“I probably don’t help because I’m going to reinforce the focus on that and maybe every coach will be asked this week about ‘what do you think about ruckmen and hit-outs?’ Can’t wait for that.

“But in the end, would Brodie have been one of the strongest performers on the field? I would have thought so.”

Buckley was philosophical about a game in which Collingwood led for almost the entirety.

“There’s a lot of things we could have done better and when you lose a game at the death you’re probably not quite as positive as you might be otherwise.”

Lions coach Chris Fagan lauded his players’ spirit after enduring a tough week in which they have been stranded in Victoria.

He said that another heart-stopping finish had tested his nerve.

“Well I couldn’t look, and I reckon my mum would have been at home saying her Hail Marys that the ball went through,” Fagan said of Bailey’s kick.

The Lions will travel to Ballarat on Wednesday for that meeting with the Western Bulldogs next Saturday. Darcy Gardiner, Jarrod Berry and Oscar McInerney could all return from injury for that game.

Fagan wasn’t sure if the Lions would receive further reinforcements but said in an ideal world the whole squad would be in Victoria as he felt the club was somewhat “fractured” by the partial relocation.

Keep up to date with the best AFL coverage in the country. Sign up to receive our newsletter twice-weekly during footy season.

Tags: ‘Largely, Buckley, Irrelevant:
You may also like
Latest Posts