Essendon’s VFLW side capped off an incredible, undefeated season with a grand final win over the Southern Saints at ETU Stadium on Sunday, earning the first premiership for the club’s women’s program since it was introduced in 2018.

This year was the first completed VFLW season since 2019, due to COVID-19 disruptions, and Essendon had a firm hold on top spot and finished the home-and-away season as minor premiers. They were undefeated with 12 wins and two draws and won both finals by more than 50 points leading into the grand final. It was a big turnaround from their inaugural season of 2018, when they claimed the wooden spoon. 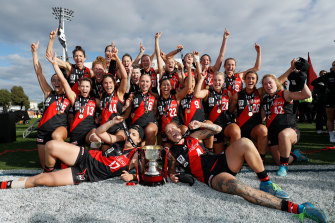 From the opening siren, the Bombers took control of the game, keeping the Saints goalless in the 35-point win and comprehensively outmatching them across the field.

The Saints can still leave with heads held high after finishing fifth on the home-and-away ladder and claiming three consecutive finals wins over teams above them to get to the decider.

Essendon football manager Josh Mahoney told The Age earlier in the week that it was a nice way to launch the club’s inaugural AFLW season, which begins next month.

The Bombers were unsuccessful in their bid for an AFLW licence back in 2018, after which Mahoney said they made the decision to invest heavily in women’s football through a VFLW program. 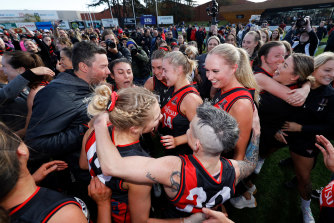 The Bombers embrace after their win.Credit:AFL Photos

“We’ve been able to do that and add to that investment year-on-year,” he said.

“It’s set us up not only to have a very good reputation for our VFLW program but also set us up for the introduction of AFLW in their first season, coming up shortly.”

Similarly, Brendan Major, head coach of the VFLW side, acknowledged the importance the VFL plays for pathways in his post-match acceptance speech. “The VFL is really important, it’s huge to the development of the game. It’s huge for feeding the AFL.”

The other AFLW expansion club with a VFLW program is Hawthorn, who signed 15 players up to AFLW level. However, the Hawks transitioned them out of VFLW finals and into AFLW pre-season. Hawthorn told The Age this was “to best prepare them for the [AFLW] season ahead”.

Frew, who kicked two goals in the decider, said after the match the feeling was “unreal”.

“We’ve been growing this program for four or five years and to top it off like that, mate, I have no words,” said Frew, who is the leading goalscorer for the season.

“I’m living the dream, literally. I’m so excited. I’ve got my childhood dream, I’ve got a premiership with an amazing group of girls and now I get to go on to the AFL, it honestly couldn’t be better.”

Tierney, who also scored two goals and will be joining Frew in the AFLW, said she was “just overly happy”.

“I wasn’t a part of the club five years ago, but they’ve built it and established it so well and I was able to come in and just fit in so well and the girls are amazing.

“And it was so much fun and that’s the main thing.”