Dave Rennie has put his faith in the raw halves combination of Tate McDermott and Noah Lolesio to guide Australia to a series victory against France in Brisbane and told firebrand back-rower Lachlan Swinton to continue his violent approach in his first Test appearance since a red card on debut.

Wallabies selectors devised a plan weeks ago to combat the four-day turnaround between the second and third Tests of the truncated France series.

Rennie decided to roll out near identical teams in game one and two in bid to wrap up the Trophée des Bicentenaires, but a 28-26 defeat in Melbourne – Australia’s first loss in seven years against France – has forced the Wallabies boss to slice and dice his starting XV.

Hunter Paisami is the only starting player to change positions, moving from outside-centre to inside-centre, just days after Rennie said he was better suited to No.13.

Rennie confirmed on Thursday James O’Connor had suffered an injury setback this week (groin) and was no guarantee to return in time for the Bledisloe Cup opener on August 7. 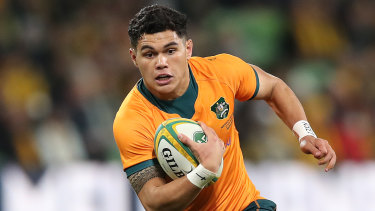 Noah Lolesio will again start at No.10 in the third Test against France.Credit:Getty

It was hoped O’Connorcould take some of the load off Lolesio’s shoulders, but the 21-year-old is now set to start his third Test in a row, having played every minute of the series so far.

With Jake Gordon benched after two reasonable performances, Lolosio’s partnership with McDermott will be crucial. The pair have shown glimpses of flair during McDermott’s 20- and 24-minute cameos off the bench in Brisbane and Melbourne.

Lolesio, however, won’t have the experience of Matt To’omua outside him this time. Paisami’s apparent improvement in communication will be key for the Wallabies defence.

Rennie said there had been some reluctance to start McDermott previously due to his core skills, but that his running game was becoming harder to ignore.

Wallabies team for third Test against France in Brisbane

“He’s been working really hard on his core skills around the quality of the distribution and his kicking game,” Rennie said. “He brings a lot of energy. Tate provides a point of difference and we like that about him.

“We went in with a plan a few weeks ago, understanding the challenges of backing up on a short turnaround. Some of our training was actually tougher than the games we have played so far around the running metrics and physicality. We knew that we’d need to manage certain players.

“Some decisions have been made around form. Some of them we reckon we’ve got guys who can back up again. They’re ready to go. Guys are going to get an opportunity to make a statement.”

One player close to selection for game one was Swinton; the designated mongrel of the Australian forward pack who relishes physical confrontation on both sides of the ball. 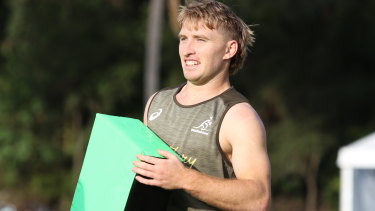 Swinton was sent off on Test debut in Brisbane last year as well as being red-carded in the Waratahs’ final game of Super Rugby Trans-Tasman – later successfully appealed at the SANZAAR judiciary – but Rennie said Swinton’s aggressive style isn’t an issue.

“We want him to be really physical and that’s his game and point of difference,” Rennie said. “Why would you tell him not to?

“In 35 minutes [on debut] he was defensively devastating. He got one wrong where he didn’t dip.” 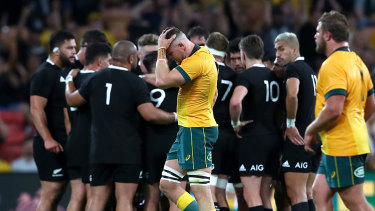 Lachie Swinton is sent off against the All Blacks last year. Credit:Getty

Prop James Slipper and hooker Brandon Paenga-Amosa have been retained in the front row but Australia’s star in Melbourne, Taniela Tupou, has been moved back to the bench with Allan Alaalatoa set to start in the tight-head position.

“Nella is a beast isn’t he,” Rennie said. “With Nella off the bench he is a real weapon and a real point of difference in that last 30 or 40 minutes.”

Second-rower Darcy Swain has earned a maiden Test start in place of Matt Philip, while Lukhan Salakaia-Loto and captain Michael Hooper will be required to put in big shifts after playing every minute of the first two Tests.

“Hoops is a machine,” Rennie said. “If we had been training four days after the Test, it’d be full throttle, so we’re confident he can back up. We’ll share the load if he pulls up lame.”

Ikitau joins Paisami in the centres, while Marika Koroibete and Daugunu will take their place on the wings.

Tom Wright has been omitted from the matchday 23 altogether after two underwhelming performances.

Reece Hodge was touted as a potential option at fullback for this match but will come off the bench instead, with Tom Banks retaining the No.15 jersey for the third Test in a row.

“We want to have a really optimistic mindset around how we play,” Rennie said. “We think we’re fitter and we can play up-tempo.

“We probably played better [in Melbourne] but lost key moments and ended up finishing second. That just shows how tight the teams are.”

Meanwhile, Rennie revealed Jordan Petaia was eligible for selection after making a speedy recovery from a quad injury. Instead, he will play club rugby in Brisbane as a fullback – a position where he could feature at for the Wallabies later in the year if Banks doesn’t lift his game.

Watch the series decider between the Wallabies and France this Saturday with extended coverage, ad-free, live & on demand on Stan Sport from 7:15pm and also on Channel 9 from 7:30pm AEST.

Tags: as, at, Lolesio, No.10, R, retained
You may also like
Latest Posts