Zac Lomax was poleaxed one minute, then slotted a match-winning sideline penalty goal the next to save the Dragons blushes at Commbank Stadium.

Staring down a 16-6 half-time deficit after two sin-binnings against the last-placed Tigers, St George Illawarra clawed their way back to 22-apiece as golden point loomed in a topsy-turvy contest.

As the last of 26 errors in the game gave Lomax a run down the right edge, Tigers centre Asu Kepaoa came across in cover and bundled his opposite number into touch with heavy and high contact.

As Kepaoa walked forlornly to the sheds as the third sin-binning of the match, Lomax calmly lined up the penalty goal a few metres inside the sideline and nailed home a 24-22 triumph.

For the second time in as many weeks, a dozen Dragons proved enough as Anthony Griffin’s side was reduced to 12 men for a quarter of the match.

After downing the Gold Coast with Francis Molo sent off last week, first-half infringements from Cody Ramsey and Jack Bird had the Dragons in all sorts and the Tigers daring to dream after conceding a record 72 points to the Roosters.

A double to rookie back-rower Tom Freebairn gave Brett Kimmorley’s beleaguered side a surprise 10-point advantage at the break and hope of jumping out of last place and ahead of the Titans on the ladder. 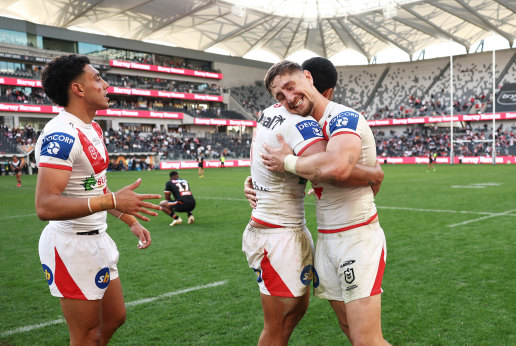 But second-half tries to Tautau Moga and Lomax levelled up proceedings as the Tigers scraped together just 41 per cent of possession aftera slew of second-half six-agains and errors.

Even with all the momentum against them though, the Tigers still threatened.

Having barely seen the ball for the second stanza, and regularly squandered it when they did, Zane Musgrove and Jock Madden threatened to pull it from the fire, though.

When Madden streaked away after Musgrove’s offload, the Tigers suddenly led 22-16.

But as has been the Tigers’ lot in 2022, their gutsy second-half effort came with requisite heart palpitations when Junior Pauga inexplicably touched a short drop-out inside the Dragons 10 metres.

An Adam Doueihi error doubled those nervous moments before Jackson Ford strolled over to level scores once more in the 75th minute, before Lomax iced a thrilling finish.

The irony of ill-discipline ultimately proving the difference was not lost on Tigers followers given the Dragons’ woes in the first half.

Where Ramsey’s marching for impeding Starford To’a could be argued as harsh, Bird’s was nothing short of hare-brained after he was penalised for tackling Daine Laurie in the air.

Having already been warned for back-chat earlier in the half, Bird was first pinged another 10 metres for dissent, then sent for 10 minutes as he continued to blow up at referee Lachlan Kennedy’s ruling.

Errors all over the shop from both sides saw a mistake being made every two minutes to start an all-bottom eight affair.

But against 12 men, the Tigers eventually made the Steeden stick as first Nu Brown and then Freebairn got themselves on the scoresheet.

When Bird returned he made up for his chirp, constantly threatening in attack and eventually slotting into dummy-half as well late in the piece.

It was Bird’s grubber that led to Lomax’s first try to draw the Dragons level, before Lomax’s own boot sealed a nervy win in the final seconds.