It quickly became clear why St George Illawarra locked up Zac Lomax to a five-year, $3 million deal over the summer.

While winger Jordan Pereira scored four tries and Tyson Frizell looked comfortable back on an edge – well clear of the ugly stuff in the middle – Lomax's seamless transition to fullback would have been the most pleasing thing for coach Paul McGregor and long-suffering Dragons fans. 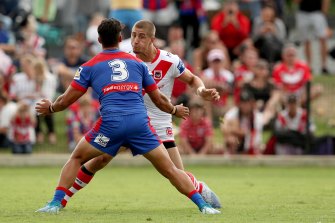 Zac Lomax looked sharp at fullback against the Knights in Maitland.Credit:NRL Photos

The Dragons ran out big 38-12 winners against Newcastle in coach Adam O'Brien's first game in charge.

O'Brien stormed into the middle of the Maitland Sportsground at the end of the third quarter after his side had conceded four tries in the one quarter and delivered an almighty spray.

The first-year coach's blast was almost as impressive as Lomax's form over three quarters.

O'Brien will also be sweating on the fitness of back-rower Siona Mata'utia, who appeared to clutch at a left knee and came from the field after half-time.

Lomax, just 20, had a hand in a couple of tries, was always around the ball and forever safe under the bomb during a sharp display for three quarters. He was only meant to play the first half and make way for Tristan Sailor, but McGregor kept him going.

Those fans heading out to Mudgee next weekend for the Charity Shield will be keen to see Latrell Mitchell wear the No.1 for South Sydney for the first time – but will be pleasantly surprised by the quality of Lomax.

He was also handy with the right boot, knocking a few conversions over from the sideline.

This time last year McGregor was busy trying to work out whether to play Gareth Widdop, Corey Norman or even Matt Dufty as his first-choice fullback.

But Lomax, who has played only one of his 17 NRL games at fullback, could be in for a big year.

The flying Fijian, who started ahead of Jason Saab, then thought he had a second try on the stroke of half-time, only to bobble the ball.

The Knights had scored earlier in the quarter through development player Chris Randall.

Frizell, now a Knights target, shifted between lock forward and back row last season but looked comfortable on an edge.

Trent Merrin was rested from the match because of a hamstring twinge but will be fit for the Charity Shield, as will James Graham who joined Merrin and injured trio Cam McInnes, Dufty and Korbin Sims on the sideline.

Unlike the Nines last weekend, the Dragons escaped with no injuries.

The Knights were led by Mitchell Pearce and enjoyed plenty of early possession and field position.

Tim Glasby and Aidan Guerra were injected into the game in the second half, David Klemmer played the opening 20 minutes and fellow Blues prop Daniel Saifiti was given a little longer before getting a spell.

They will welcome the return of Kalyn Ponga and Connor Watson for next week's final hit-out against O'Brien's former club the Sydney Roosters.

Tags: fu, in, Lomax, shines, troublesome
You may also like
Latest Posts