Melbourne Storm coach Craig Bellamy ranks the prospect of losing Dale Finucane in the same class as the departures of Cooper Cronk and Greg Inglis.

The premiership lock is expected to make a decision on his future soon with several clubs, including the Storm, in line for his services but Melbourne’s offer is believed to be less than what more desperate clubs are willing to pay. 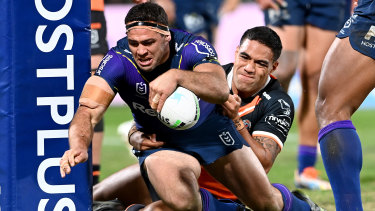 Bellamy would love to keep Finucane but knows the other opportunities could prove too enticing for the Bega-raised forward who is being rested by the Storm for Friday night’s clash with the North Queensland Cowboys.

“I don’t think we’ve lost too many bigger besides Greg Inglis and Cooper Cronk – I can’t think of too many other players that we’ve wanted to keep more than Dale if he does leave,” Bellamy admitted.

“So I put him up there in that sort of category. I don’t know how you measure losing him, but it’ll be a great loss, both on and off the field.”

Bellamy said the Storm wouldn’t simply be bowing out of the race.

“It’s probably not looking too great for us but we will hang in there until the end,” he said.

“We’d love to keep him at the club, there are no divided opinions on that here. It’s just putting the dots together as far as figures and whatever.”

With outside back George Jennings out for four to six weeks with a knee injury, suggestions have been raised that the Storm could look to 2022 signing Xavier Coates making an early arrival from the Brisbane Broncos.

The Storm enquired about gaining Coates early a few weeks ago, possibly with centre Brenko Lee, who has signed with Brisbane next season, going back the other way, but that offer was turned down.

Reports have suggested the Broncos don’t plan to play the 20-year-old for the rest of the season but Bellamy said he didn’t know if Coates might be able to join the club, which has one roster spot open.

“It’s something we’ve looked at but, like, I don’t know whether the Broncos would put a line through him or not,” Bellamy said.

“If they have, you would think they wouldn’t be against letting him go early.

“If it happens, it happens. If it doesn’t, it doesn’t. There’s not much we can do about it, it’s up to the Broncos.

“If they don’t want to play him, they are well within their rights, but it seems a bit harsh.

“What that does for Xavier’s mental health, if he is fit to play and is not playing, I don’t know, but it’s their decision.” 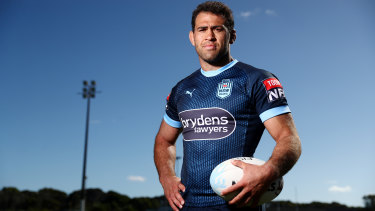 Bellamy was coy about his plans for returning fullback Ryan Papenhuyzen, confirming the Clive Churchill medallist is expected to play on Friday night but wouldn’t play all 80 minutes in his first game back since battling prolonged concussion symptoms after being knocked out on May 16.

With Origin star Cameron Munster joining second-rower Felise Kaufusi and Finucane in resting this week, there is a chance Bellamy could use current fullback Nicho Hynes or Papenhuyen in Munster’s role as five-eighth for parts of the match, along with Cooper Johns.

“We’ve got a plan and we will hopefully get a chance to put that into operation,” Bellamy said.

Earlier this week Storm prankster Brandon Smith was shown placing rocks in Bellamy’s suitcase after the team’s arrival in Noosa, where they are based while away from Melbourne.

The veteran coach will get his vengeance.

“It’s a little early [in the] year, he can expect it when he least suspects it,” Bellamy said with a grin.

Tags: be, equal, Finucane, losing, would
You may also like
Latest Posts