The great recent finals rivalry between Collingwood and West Coast went to a new level at Optus Stadium on Saturday night.

And somehow, Collingwood managed to hold on for an upset one-point win over the Eagles in an elimination final thriller. 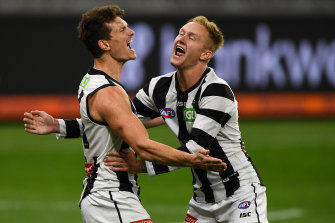 When Jeremy McGovern took possession deep in the Eagles' defence and pushed his side forward with 40 seconds remaining, memories of them steeling the 2018 grand final came rushing back.

Collingwood had looked the most likely winners for most of the contest, but when Oscar Allen marked and put the Eagles in front five minutes into the fourth term, the Collingwood coaching box would have been more than nervous.

They came again though. And Mihocek’s second goal gave the Magpies a 13-point lead with only six minutes to play. It looked enough.

But the 32,865 people watching the game live – the biggest crowd at an AFL game this season – lifted Josh Kennedy to kick two late goals to get the margin back to just one.

But the McGovern push forward was turned over this time. There was no Eagles dream finish.

Collingwood are now one win away from a third consecutive preliminary final appearance.

They head back to Queensland to play Geelong first, in a semi-final at the Gabba next Saturday night.

COX OUT OF THE BLOCKS

Collingwood gambled at the selection table, choosing five players standing at least 200 centimetres tall for the clash. At quarter-time, when they led by 16 points, it seemed a successful decision.

Cox kicked three goals in five minutes in the second half of the first quarter to set the Magpies on their way. The performance triggered memories of the 2018 preliminary final, when the big forward took 11 marks and kicked three goals to demolish the more-fancied Richmond.

On Saturday, it was West Coast’s Tom Barrass that had his hands full with Cox, with all three of those first-term goals coming from contested marks. The Eagles' defence regrouped at the break, dragging the margin back to just four points at half-time.

Cox didn’t register a possession in the second quarter and hardly touched the ball for the remainder of the game. But Mihoceck finished with three and Jordan de Goey managed two from his nine possessions.

West Coast won all seven previous games at home during this season, including a 66-point flogging of the Pies in round eight. But with Tim Kelly well held by Levi Greenwood and Luke Shuey struggling to get into the game, the free-flowing style the Eagles usually enjoy wasn’t there. Most of their run came from half-back, with their defence under pressure for most of the night.

Collingwood looked good in transition, potentially a benefit of a round-16 bye and having played only two games in 29 days previous. Adam Treloar was the game’s highest possession winner with 25 touches, while Taylor Adams had 24.

NAITANUI PUTS ON A SHOW

Another dominant performance from Nic Naitanui almost upset the Pies' plans. Not for the first time this season, the Eagles ruckman had the better of Brodie Grundy, who was playing his 150th game.

Naitanui displayed every skill that earned him All-Australian selection this season. At half-time, the Eagles were back in the game due largely to Naitanui’s performance. He had nine possessions and five clearances at the main break.

Nathan Buckley started Grundy on the bench to start the second half, opting for Darcy Cameron in the middle of the ground.

The Eagles won the first clearance of the quarter and Allen kicked a goal to put the Eagles in front less than a minute into the term. It wasn’t Grundy’s best night, but he gets next week to make amends.

Tags: Eagles, edge, in, Magpies, past, th
You may also like
Latest Posts