The mistreatment of Eddie Betts, probably the most loved AFL player of the past decade, is an embarrassment to the Adelaide Football Club, to the AFL and to the code of Australian rules football.

This is not a matter that can be easily dismissed, simply because it happened more than four years ago. 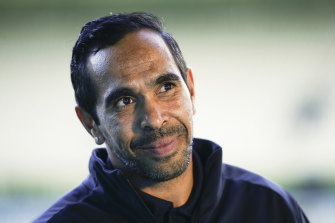 Eddie Betts has detailed his experience at the Crows’ 2018 pre-season camp.Credit:Getty Images

Betts is still hurting and the game, club, competition – and fair-minded members of the public – must ensure that there is a healing and that he and other wounded teammates do not carry any further pain or humiliation from what was another club’s misguided attempt to find that elusive “edge” in performance.

The AFL failed Adam Goodes because the leadership of the competition was too slow to recognise the racial prejudice inherent in the booing of Goodes and in the disgrace of a champion being hounded into exile.

If there is a learning from the sorry Goodes affair, it is that the competition and club can make a stand, on behalf of the wounded players, and ignore those who are critical of Betts.

Most fans were sympathetic to Betts on Wednesday, as the awful revelations from his book were published in The Age excerpts. Unfortunately, a noisy minority of Crows’ fans questioned Betts’ motives and/or his lack of gratitude to the club.

Adelaide should take note of how West Coast CEO Trevor Nisbett dealt with the booing of Goodes by Eagles fans several years ago – Nisbett plainly condemned the booing by his own.

While these events took place four and a half years ago, it is perplexing that the AFL did not take firmer action, or take a stronger stance – including in the language deployed – in dealing with the club’s failure to protect Betts and other teammates from bizarre and humiliating exercises from the camp that followed a grand final defeat.

The AFL position is that the traumas detailed by Betts were investigated at the time and that distasteful as they were, no AFL rules were violated and thus no formal action was taken.

The league did not think that what transpired, at least for several players at the camp, would pass muster for the all-purpose crime of “bringing the game into disrepute” – the charge that was laid against Essendon and James Hird in 2013 in the midst of the injection scandal.

From Adelaide’s vantage, however, the price that has been paid is considerable. The senior coach, football manager, chief executive and president from that period have all departed.

The brand damage to the Crows is even greater, bearing in mind that they carry the stain of the Taylor Walker incident from last year. They are seeking to improve in the Indigenous space, which all clubs (and media) must.

Consider that Collingwood commissioned a devastating self-examination in the Do Better report on racism, largely for events that took place up to 2014. How would the Crows fare, if subjected to the same forensic examination of handling race and Indigenous culture in particular?

They stumbled at first on Wednesday, when Mark Ricciuto, the board member and ex-great, said he hoped Eddie could move on from the camp – a comment that misread the room and which Ricciuto would surely like to revisit with larger slice of empathy and regret.

Then, chief executive Tim Silvers struck the more fitting note by issuing an on-the-spot apology to Betts – intentionally offered before the media rather than in a statement – and to any others who had experienced distress.

The AFL issued a careful comment, which acknowledged the “hurt” felt by Betts, his family and “by extension all Indigenous players” via the disastrous camp, and then went on to outline all the changes that had come to pass since those days – such as vetting any “external provider” of pre-season camps or alike and getting clubs to hire Indigenous welfare officers. In essence, the league was saying that it had corrected what was awry.

The AFL Players Association, meanwhile, hinted on Wednesday that it hadn’t done enough to act because “players felt pressured into remaining silent”. Really?

Perhaps the player delegates to the union felt a stronger obligation to the club than to some traumatised teammates. Or that they misguidedly felt their experience was fine, so the camp wasn’t so bad.

No one – not the club, competition, leaders of the Crows, the players’ union, nor even much of the media – emerge well from what Betts, to his credit, has laid bare. His soul included.