The Western Bulldogs have secured a support ruckman but now face a dilemma over what to do about premiership midfielder Josh Dunkley who has officially told the club he wants out.

Athletic Brisbane Lions ruckman Stef Martin has agreed to join the Bulldogs as much-needed support for talented young ruck Tim English whom the Dogs admitted needed a seasoned ruckman to help shoulder the ruck burden in a long season.

The 33-year-old uncontracted player is expected to be a cheap trade. He would have been eligible for free agency, having served eight years at the Lions, but the free agency deadline passed and a trade is required unless he is delisted and able to move as a delisted free agent.

The Martin move comes as Dunkley requested a trade to Essendon with his manager Liam Pickering admitting the move will be difficult as the Bulldogs' initial reaction was that they were not interested in trading the player who still has two years to run on his contract. 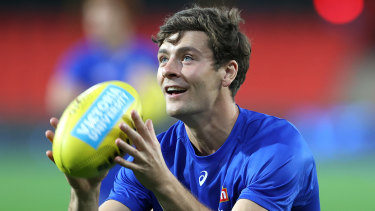 Josh Dunkley: what does the future hold?Credit:Getty Images

"It's now up to the Bombers to deliver a scenario that the Bulldogs might think twice about," Pickering told Trade Radio.

Pickering dismissed reports Dunkley wanted to leave because he did not like the off-field culture at the Bulldogs saying the decision was based on wanting to spend more time in the midfield.

Early draft picks are of little interest to the Bulldogs this year as they will secure the best player in the draft Jamarra Ugle Hagan as a priority academy selection and so offering early picks for Dunkley is unlikely to entice the Bulldogs to move on Dunkley unless they could use that pick to trade for another player.

Essendon and Carlton meanwhile are in a stand-off over a trade for Adam Saad. Essendon want Carlton's first pick – selection eight – for Saad but the Blues believe that in isolation is too much and want another draft pick back from Essendon if they were to give up a pick that high.

Carlton are edging towards splitting pick eight in a trade with another club for two later first round draft picks and so keep one pick and trade one to Essendon for Saad. Essendon though insist they want pick eight.

The problem is currently Essendon don't have another pick of value to give the Carlton. The Bombers have picks six, seven, 48, 67, 73, 78, 85 in the draft and AFL rules stop them trading future picks this year because of the number of previous future picks they have traded in the last few years.

They remain in negotiations with Port Adelaide over a trade for Orazio Fantasia. Port have suggested pick 29 for the player but Essendon have rejected that offer.

Jye Caldwell, the young and highly-rated midfielder from GWS, has also nominated Essendon as his preferred destination. Essendon need a pick to do that trade.

The Bombers will only need a late pick to trade for Gold Coast’s tall forward/ruckman Peter Wright.

Pickering also gave an update on North Melbourne's Jed Anderson. He was hopeful of his client being re-signed soon.

St Kilda meanwhile are doubtful they will be able to pursue Collingwood's Adam Treloar after bringing Brad Crouch into the club, even though the club remains interested in the player.

The Saints are set to land delisted Bomber Shaun McKernan as a delisted free agent. McKernan was offered a one-year deal by both St Kilda and Melbourne but chose the Saints where the deal includes a trigger for a second year.

A trade for Geelong speedster Nakia Cockatoo – who wants to head to Brisbane – has been complicated somewhat by the Lions' need to keep draft points for several of their academy prospects including Blake Coleman, the younger brother of Lions goalsneak Keidean Coleman.

In the day's only completed trade, Hawthorn traded their future fourth-round pick for Adelaide key defender Kyle Hartigan. The backman had been eligible to walk to the Hawks as a delisted free agent but Hawthorn opted instead to trade for the Victorian, avoiding the risk that their free agency compensation for Isaac Smith – who headed to Geelong last Friday – could have been diluted.

Melbourne's versatile tall Tom McDonald meanwhile looks increasingly likely to remain at the Demons in 2021 despite both parties being open to a parting of ways.

Tags: a, Bomber, Dunkley, make, Me, says
You may also like
Latest Posts