Manly will approach the NRL to discuss how the no-fault stand down rule is applied to Manase Fainu if further delays in the legal process result in the hooker's suspension dragging into a second season.

Fainu has vowed to fight to clear his name and will get the opportunity to formally enter a not guilty plea at a district court arraignment scheduled in Parramatta on Friday. Fainu was suspended indefinitely after he was hit with multiple charges relating to the stabbing of a man at a Mormon church dance in October. 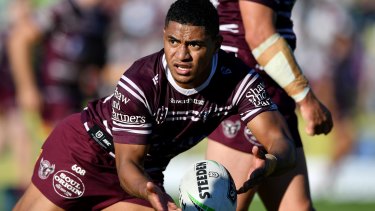 Currently under house arrest after being granted bail, Fainu's season was already a write-off due to complications relating to shoulder surgery. However, there is every chance he will be sidelined for a portion, or even all of, next season as court cases back up due to the coronavirus outbreak.

The Sea Eagles supported the introduction of the stand-down rule, brought in to protect the image of the game and prevent a sponsor exodus, even when it affected another of their players, Dylan Walker. That continues to be the case, although Manly chief executive Stephen Humphreys said a review may be appropriate given the unexpected delays in cases being heard.

"We as a club support the no-fault stand down rule," Humphreys told The Sun-Herald. "We understand why it was brought in and we support it. But I don't believe anyone contemplated the possibility of there being one- and two-year delays in cases being heard and that players maintaining their innocence being unable to play for that excessive amount of time.

"Given the circumstances we all find ourselves in, we think it is worthy of a review."

Humphreys said he would wait until after Fainu's arraignment, which could give an indication of how long the court process will take, before approaching the NRL.

"I think it is worthy of consideration at least," Humphreys said. "It's about trying to find that balance of treating the player fairly and reasonably whilst maintaining the intention of the stand-down rule."

Sea Eagles hooker Danny Levi has done a commendable job at dummy half this season, but in Fainu the club has a player considered a potential NSW representative who they cannot use.

Fainu is one of just two players suspended under the stand-down rule. The other, Jack de Belin, hasn't played since he was charged with sexual assault in December of 2018. The Herald revealed earlier this month that St George Illawarra powerbrokers are also keen to broach the issue of de Belin’s suspension with head office. Like Fainu, the former NSW back-rower is pleading not guilty to the charges.

It's possible the de Belin case could drag into a third season, but the long sabbatical hasn't affected his market value. In the final year of a Dragons contract worth $595,000, the Warriors are prepared to top up that amount by $200,000 a year if he is acquitted.

While the NRL couldn't foresee the court delays when it introduced its hardline stance on player behaviour, it may remain unmoved by any approaches by the Sea Eagles and Dragons. With corporate support even harder to come by due to fallout from COVID-19, it will take compelling cases to shift its current position.

Tags: Manly, NRL, review, St, to, urge
You may also like
Latest Posts