Krisnan Inu came to Salford Red Devils’ rescue again with a converted try in the closing minutes to snatch a 12-10 win over a youthful St Helens team in Monday’s first Super League match.

Academy graduate Josh Eaves got Saints up and running with a try after just three minutes on his first start for the club followed by another youngster, Lewis Dodd, kicking three goals. However, Pauli Pauli crashed over just before the break to pull Salford back to 10-6 at half-time.

Both sides had opportunities after the break, with St Helens debutant Tom Nisbet and Salford’s Rhys Williams both losing possession in great positions. But it was Inu who snatched victory for the Red Devils in the 77th minute, going over wide on the left and then coolly converting his own score. With an eye on Friday’s derby against Wigan Warriors, Saints coach Kristian Woolf opted to field a vastly-inexperienced side with five debutants and watched on with immense pride as they pushed the Red Devils all the way.

The youngsters looked set to extend the club’s winning run to 11 matches after building up a 10-0 lead but they crucially conceded just before the break and then again near the end.

It was only the seventh win by Salford in 49 meetings in Super League with Saints and almost certainly their least impressive as the Saints youngsters took all the plaudits.

England prop Alex Walmsley, who starts a two-match ban after the game, was one of just four players to retain their places from the team that thrashed Challenge Cup winners Leeds last Friday. 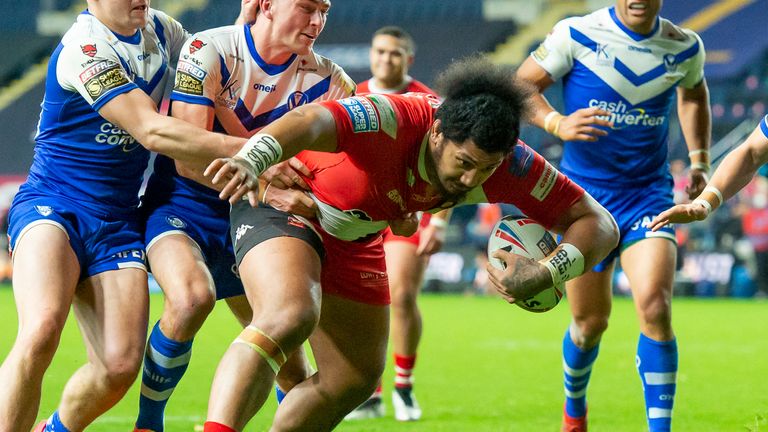 But veteran front-rower James Graham was able to return from a period of self-isolation and, along with Walmsley, laid a superb platform for the reigning champions.

Reeling from a 58-12 rout by Wigan on Friday, the beaten Challenge Cup finalists looked lethargic from the start, despite an impressive return from coronavirus by full-back Dan Sarginson.

Saints, conversely, were full of energy and went in front after three minutes when second-rower Dom Peyroux burst through the Salford defence to get hooker Eaves over for a try on his first start for the club.

Scrum-half Dodd, also making his first start, added the conversion and kicked two penalties as Saints set up camp in the Red Devils’ half and waited for the errors. 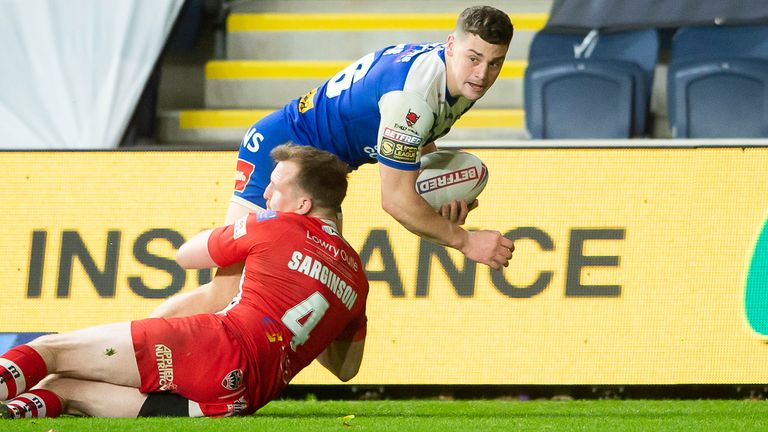 The young Saints were good value for their 10-0 lead as Salford, despite fielding 10 members of their Wembley line-up, struggled to find any cohesion. Their passing was awry, they kicked out on the full from one restart and could not find touch with a penalty.

In fact the Red Devils never threatened the Saints’ try-line until burly second-rower Pauli took Tui Lolohea’s pass 10 metres out and proved unstoppable as he powered over for a try, which Inu converted to cut the deficit to four points.

If conceding the try knocked the confidence of the Saints’ youngsters it did not show as they continued to hold their own against their more experienced opponents.

They should have extended their lead after 55 minutes when Jack Welsby’s pass found winger Nisbet in space 10 metres out but he lost his grip on the ball as he dived over the line. That was matched by Salford’s experienced Wales international Williams, who dropped the ball with the line at his mercy 10 minutes from the end.

Just when Saints looked set to hang on for a famous victory, Pauli punched another hole in their tiring defence and Inu had enough space to cross for the crucial try.

Source: Ravens QB Jackson positive for virus
Recent Posts
This website uses cookies to improve your user experience and to provide you with advertisements that are relevant to your interests. By continuing to browse the site you are agreeing to our use of cookies.Ok