The British and Irish Lions saw off a tough first-half challenge from a youthful Sharks side to run out 71-31 winners at Loftus Versfeld on Saturday.

The Lions were due to play the Bulls but due to Covid-19, they lined up once more against the Sharks who they easily beat 54-7 on Wednesday.

However, the Sharks – who had made 11 changes to their midweek side – took on the Lions in the physical battle and capitalised on the visitors’ high error count.

At 26-apiece after the first 40 minutes, the Sharks were reduced to 14 men after Jaden Hendrikse was shown a red card for an elbow to the head of Liam Williams.

Despite the Sharks managing to score a fifth try, they ran out of steam as the Lions ran in a further seven tries for a convincing win that was shaping up to be their toughest test of the series so far.

The Lions were forced into making two late changes when Maro Itoje was ruled out because of a mild gastric bug and Finn Russell could not overcome an Achilles injury, resulting in Courtney Lawes, Beirne and Bundee Aki coming into the 23. 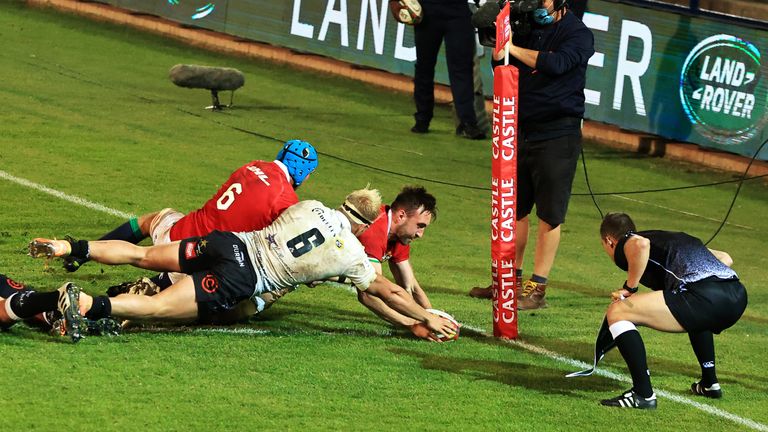 It looked like business as usual as Chris Harris scored the opening try after just four minutes and Dan Biggar’s conversion gave the Lions a 7-0 lead.

The Sharks hit back six minutes later after a mistake from Elliot Daley was picked up by the Sharks and full-back Anthony Volmink raced away to score. Lionel Cronje’s conversion levelled the scores.

The Sharks were in the lead after 15 minutes after they ran in their second try. Some big carries followed by a dink through from Cronje into the Lions goal area with Thaakir Abrahams getting to dot it down.

A Jamie George try made it all square before the Sharks took the lead again on the 24th minute when Jaden Hendrikse intercepted a poor Gareth Davies’s pass and raced away the length of the field to score.

The Lions responded immediately as Duhan van der Merwe scored in the corner and Dan Biggar’s conversion made it 19-19. 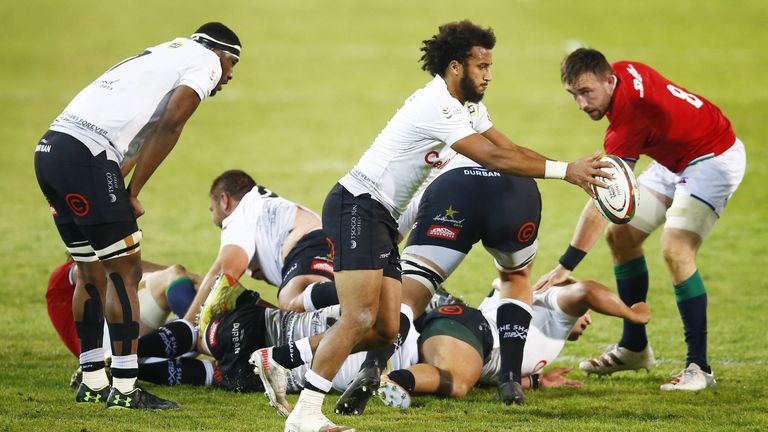 Another mistake from the Lions saw Abrahams scoop up the ball and race down the wing before passing to Volmink who went over for his second.

Once again the Lions hit back immediately after some strong carries saw the Sharks defence open up for Tadhg Beirne to dart over and Biggar’s conversion made it all level at 26-26 at the break.

The Sharks challenge came to an end five minutes after the restart as Hendriks was red carded for a cheap shot on Williams.

The extra man paid dividends almost immediately as Conan put the Lions in front before Daly ran a great line on a pass from Williams to score. 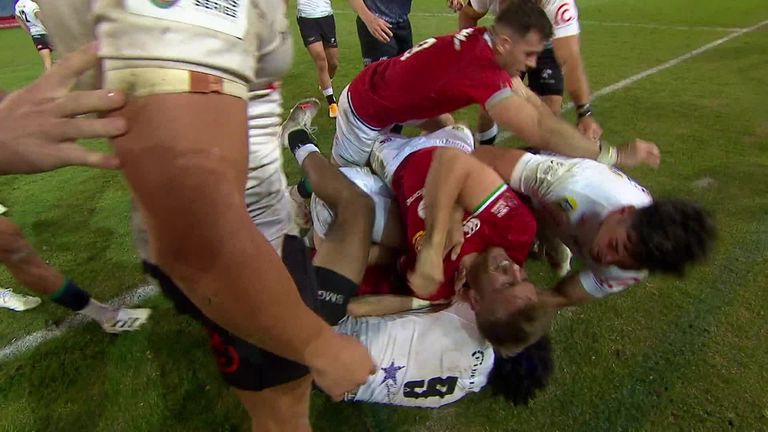 Werner Kok pulled one back for the Sharks after he charged down a Conor Murray clearance, however the floodgates soon opened. George went over for his second before Watson scored his brace with Beirne and Curry also going over.

Tags: British and Irish Lions, Rugby
You may also like
Latest Posts