St Kilda have locked in emerging key forward Max King until the end of 2026 after the 20-year-old signed a four-year contract extension.

It’s a huge boost for the Saints after a shocking week off the field where their disappointment at the decision of club leaders Seb Ross and Tim Membrey to miss the match against Adelaide in Cairns to be with their family spilled into the public domain.

King is regarded as one of the game’s most promising key forwards having already shown in his 30-game career that he has the capacity to take control of games as a marking target inside 50 with the four-year extension a sign of the esteem in which he is held. 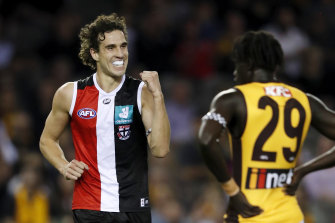 “Max is obviously a talented player and is already performing at a very high level considering this is only his second year of AFL football. He is also a very driven young man, and we are extremely confident he’ll only continue to grow into an elite key forward in the coming years,” Gallagher said.

“There’s a lot of external expectation that has been placed on his shoulders, but the way he’s handled it – even before he was drafted – is a credit to his maturity and diligence.”

There is also internal expectation that King will become the player the Saints have been craving since champion spearhead Nick Riewoldt retired with King assuming the No.12 jumper of the former skipper.

King was drafted with pick No.4 in the 2016 national draft and missed 2017 as he recovered from a knee reconstruction in 2016.

He made his debut in the round one last year and played in two finals with the Saints performing well in the elimination final. He was inaccurate for a period this season kicking 1.5 against Geelong despite dominating the match in general play but was more accurate against the Crows kicking 2.0.

The Saints have made no secret of their interest in luring Max’s brother Ben who plays with the Gold Coast.