Collingwood have handed reinvigorated utility Chris Mayne an AFL contract extension, a little more than two years after they attempted to get rid of him and his hefty pay packet.

The new deal will see Mayne, who was already contracted for 2020, remain at the Magpies until at least the end of the 2021 season. 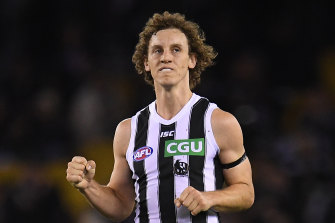 It continues a remarkable turnaround for the former Fremantle forward, who endured a rough start to his time at Collingwood in 2017, having moved to Victoria as a free agent.

In an attempt to offload Mayne and his contract – reportedly worth $500,000 per season – Collingwood attempted to trade him back to the Dockers.

The Magpies and even considered giving Fremantle a better draft pick than the one they would receive for Mayne in the trade.

But the deal fell through and Mayne was instead handed a career lifeline in 2018 as a wingman, playing 21 games as Collingwood reached the grand final.

The 31-year-old has since become a valuable contributor at half-back, featuring in 42 of the Magpies' past 48 games.

"I'm really pleased to have another year to share in the Collingwood experience," Mayne said.

"The journey so far has been tremendously rewarding, personally and professionally.

"There have been a few twists in the tale but so much to be grateful for and the faith we have shown in each other makes me very proud."

Mayne has played 217 games since making his AFL debut with Fremantle in 2008.