Shane Flanagan admits speculation about Paul McGregor's future is the "elephant in the room" for the club but says the under-siege St George Illawarra coach has done nothing but work hard and that "the playing group really want to play for him".

On the eve of the Charity Shield in Mudgee, assistant coach Flanagan also said he had under-estimated the Dragons fans' thirst for success, believing it to be more intense than that of supporters of Cronulla, who he previously coached. 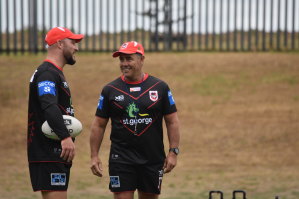 McGregor starts another campaign in charge at the Dragons on Saturday night against South Sydney and there has been continued speculation over the summer about how he needs a fast start to the season if he wants to save his job.

The fact a premiership-winning coach in Flanagan was brought in to assist only adds to the uncertainty about McGregor's future.

Dean Young looms as the likely interim coach should the axe fall on McGregor, while Flanagan is currently prevented from resuming a head coaching job until 2022 as part of his punishment for making contact with Cronulla while previously suspended by the NRL.

To be fair to McGregor, his best forward, Jack de Belin, was stood down on the eve of last season and then lost chief playmaker Gareth Widdop to a shoulder injury. 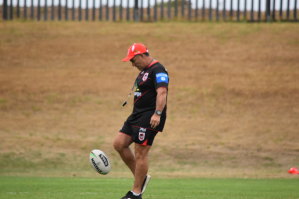 Flanagan, who played in a couple of Charity Shields for St George in another lifetime, had nothing but praise for McGregor, who welcomed the coaching structure revamp. Having been a head coach, Flanagan knows that would not gave been easy.

"He's been willing to work and listen to other ideas and how to try and do things in different ways," Flanagan told The Sydney Morning Herald.

"From my experience as a head coach, it can be hard to change. You always listen and can make subtle changes, but to have such a massive change is a credit to 'Mary'.

Dragons coach Paul McGregor will be under pressure early this season.Credit:Robert Peet

"We don't speak about his future, but we're aware of it, he's very much aware of it. But it hasn't been spoken about.

"I guess it's the elephant in the room. All we can worry about is making sure it doesn't become a factor, and if we do our best that's all we can do.

"I will tell you one thing and that's the players really respect Mary. The playing group really want to play for him, without a doubt.

"Whether we have the team or not [to go all the way] time will tell, but 'Mary' is working his butt off."

There was an embarrassing moment straight after the Dragons’ comfortable trial win over Newcastle last Saturday when a small group of St George Illawarra fans turned to the coach's box at Maitland and started chanting "Flanno, Flanno".

Flanagan has made no secret he would love to resume life as a head coach.

He has appreciated being given another chance to coach, albeit in an assistant's role, and said the Dragons' class of 2020 had trained as hard as any team he had been involved with.

"Some of the work they've put in has been top shelf," Flanagan said.

"They're willing to apply themselves to everything. I worked at the Roosters and at the Sharks, and this group has worked as hard as any other group and applied themselves physically and mentally better than most."

As for the Dragons fans, Flanagan said: "They want success, that's for sure. They're different than Sharks fans.

"Sharks fans could see what we were trying to achieve and if we competed hard and didn't win, they were still happy. That was probably because we hadn't had that success. The bar raised after 2016, in 2017 they were happy to sit back and say they had won the comp the year before, but now they want that success again.

"With the Dragons fans, they want that success year after year. I never realised how passionate they were."

Tags: 'elephant, future, McGregor, THE
You may also like
Latest Posts