The AFL’s most decorated and experienced umpire has called on the league to take greater ownership for sanctions against players who make contact with umpires.

Shane McInerney, who retired in 2019 after umpiring a record 500 games – including 26 finals – believes Giants star Toby Greene is “lucky” to get away with a three match suspension. 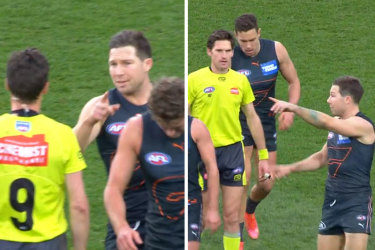 Toby Greene has been suspended for three games for his bump with umpire Matt Stevic during the elimination final.

The ban – which now renders Greene’s finals series as over – was handed down after a marathon tribunal hearing via video link in which Greene pleaded not guilty.

But McInerney believes the AFL should introduce a more streamlined process, whereby the match review officer would have the authority to hand down a suspension himself, based on the evidence at hand.

“I just hope out of this that the AFL takes ownership of this process,” McInerney told The Age.

“I think the MRO had to defer straight to tribunal because he didn’t have the capability to impose a direct penalty. I think that’s a weakness in the system because I think an issue like this that is critical to integrity, sustainability, and safety of the code needs to be owned by the code itself.

“To contract it out to three experienced, learned tribunal people – not having a crack at them because I regard them highly – but to put it out (to) them is an abdication of duty.

“If there had have been clear direction in the beginning then perhaps these sorts of incidents might’ve been avoided.”

McInerney believes the suspension itself is relatively surprising when you consider that Greene didn’t throw himself at the mercy of the tribunal and plead guilty.

He believes these sorts of incidents involving umpires are also critically important to football at lower levels, with local games often umpired by teenagers who are younger than the players.

He also hit out at an element of Greene’s defence, with the Giants’ vice-captain claiming he was looking at the team huddle when he made contact with Stevic.

“This is a player who has extraordinary skills … he’s a matchwinner, his composure, his skills, his ability to turn a game … don’t serve up the rubbish that I was looking off into the distance.

“I think he’s pretty lucky to get three weeks, to be honest.

“I think (the sanction) sends a message, but I think it sends not as harsh a message as should be sent. It’s not enough for the action … the defence that was put forward was typical of trying to explain an action that couldn’t be explained. The vision showed us all what was going on.”

McInerney is still involved at AFL level. He is part of a mental health steering committee commissioned by the league that includes Collingwood star ruckman Brodie Grundy.

The committee is two years into a three-year study, with the AFL desperate to commit more resources to helping players, staff and coaches deal with mental health issues that stem from the game.

Tags: c, calls, for, McInerney, tribunal
You may also like
Latest Posts