Collingwood coach Craig McRae said the Magpies were not rewarded as they should have been for their tackling after losing an epic qualifying final by six points.

The Magpies laid 85 tackles compared to Geelong’s 70 but few holding the ball decisions were made as the umpires put the whistle away and let the ball spill free on multiple occasions.

It resulted in a frenetic high-pressure contest with scores tight until Geelong kicked a match-winning goal with just one minute remaining.

The Magpies slumped on the ground in disappointment with McRae telling the team they needed to stand up because they had performed well in such a big game.

“We lost the game, but we’re not losers,” McRae said.

Collingwood will be without Taylor Adams for the rest of the year after he potentially tore his groin off the bone in the last quarter with the midfielder despondent on the bench as he had worked hard to declare himself fit after being out for a month. 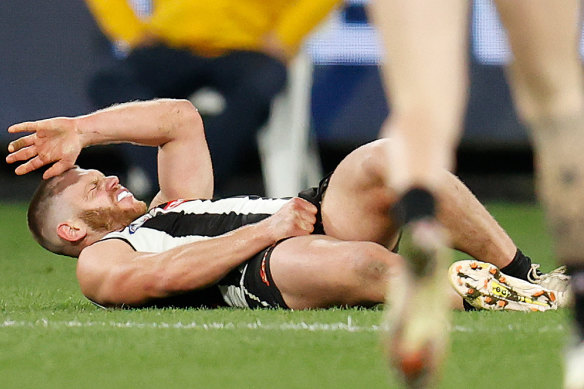 Cats coach Chris Scott said the team was still “evolving” and the future was bright as they head into another preliminary final.

The epic encounter saw the lead change multiple times with scores tied with 150 seconds remaining before Max Holmes kicked the winning goal for the Cats in the final minute.