In today’s AFL briefing, your daily wrap of footy news:

Come back for updates throughout the day.

AFL CEO Gillon McLachlan is confident crowd numbers will return to normal levels next year after yet another poor turnout on Thursday night for the match between Richmond and Port Adelaide at the MCG.

But for that to happen, McLachlan said it was imperative that the city of Melbourne recaptured its title as a “big event” city following its pandemic malaise. 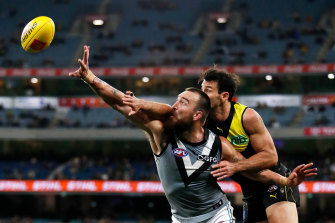 It was a small crowd on hand for Richmond’s win over Port Adelaide at the MCG.Credit:AFL Photos

“We were amazing as a city with dealing with the logistics of going to big events and we’ve got to get that back and get in a rhythm as well of where we push ourselves,” McLachlan told 3AW on Friday.

“We’re mostly doing it, but we’re not copping to 100 per cent of where we were.

“We’ll get back there. Week by week, the show rate is getting better but it’s a journey and I think that’s where we’re at.”

Thursday night’s attendance continued an alarming trend for the league which is experiencing its lowest crowd numbers in 26 years (excluding the pandemic-affected 2020 and 2021 seasons).

Only 21,757 people rocked up to watch the Tigers beat the Power by 12 points, in what was Richmond’s lowest crowd at the venue in 12 years (COVID years aside).

Frustrated by ticketing issues and over-umpiring, footy fans are less inclined to brave the cold and support their team in person.

“There will be a group of people that have got out of the habit of going to things,” he said on Friday morning. 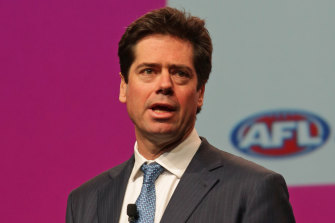 “It’s been a long couple of years where people became used to watching [games] on TV and I think it’s just going to rectify itself maybe a little bit more slowly than I would have expected.”

Pakula was confident, however, that the AFL had strategies in place to tackle crowd concerns.

“I’m going to Carlton-Essendon tonight and I expect a pretty big crowd. I imagine that the Queen’s Birthday Fight MND game on Monday will be really well attended,” Pakula said.

“It was a soft number but it was Thursday night, it was a few thousand below forecast, and it was cold, and all of the above,” McLachlan said.

“The bit about logistical challenges is I think one of the key issues because the public sales are higher than ever and the memberships are going to break the record, it’s just the show rate.

“And there’s a lot of feedback around digital ticketing, [it] is a frustration for many, that’s the No.1, and then there’s a series of logistical challenges that have come out of this pandemic that are being addressed, and they’re real.”

McLachlan dismissed food prices as being a key reason behind disappointing attendance.

“There are issues with staffing [and] service because you can’t get staff, there are lots of bits and we are working through them at the AFL and the venues and the clubs, and we need to deal with them.

“I think public transport is an issue, parking – there are just lots of pieces at the moment.”

Essendon coach Ben Rutten has issued a stern challenge to his midfield ahead of the club’s big occasion clash with old foes Carlton: if you want to be the best, then beat them.

The Bombers will celebrate their 150th anniversary tonight in front of a blockbuster crowd at the MCG, desperate to use the event as a lightning rod to turn around a dismal first half of the season.

In good news for the red and black, Rutten confirmed that Jake Stringer, Mason Redman and Matt Guelfi will all return, but No.1 draft pick Andrew McGrath remains in significant doubt with a groin complaint, despite being named in the team on Thursday night.

McGrath didn’t train at Windy Hill on Thursday morning, in front of a smattering of die-hard supporters who watched on in icy and blustery conditions.

But it was in the warm confines of an old-school super box, above the bleachers of Windy Hill, that Rutten laid down the gauntlet to a certain area of his team.

“Our midfield group, I’m really keen to see what they do this week. They have been working really hard together about how they can continue to build their chemistry and cohesion,” Rutten said.

“They’ve wanted to be the best midfield group in the competition, they don’t need [extra encouragement] from me. We’re here to support them to do that. We’ve got some experienced guys in there, and they’re desperate to be the best that they can be.”

They were fascinating comments from Rutten, who has had a plethora of issues to deal with in just his second year as senior coach.

The ferocity and tenacity of his players have come under question several times, including an incident involving senior midfielder Dylan Shiel where he was mocked by Sydney champion Luke Parker.

The Bombers face a stern test against one of the strongest and tallest midfields in the competition in Carlton.