The mid-year draft loophole utilised by Jai Newcombe and Hawthorn last year to secure the bullocking midfielder to the Hawks has been closed.

Hawthorn drafted Newcombe with pick two in the 2021 mid-season rookie draft after he nominated financial terms for a second year if he were to be drafted.

North Melbourne who had the pick one – ahead of Hawthorn in the draft – and were likely to take highly sought after ruck forward Jake Edwards in any event but the Hawks and Newcombe made certain there was no late interest in the midfielder with the financial terms. 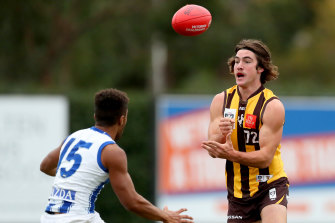 While all players taken in the mid-season draft are paid the same amount for the balance of that year Newcombe had demanded terms higher than the standard amount for a second year rookie if he were to be drafted.

This could be seen as a way of deterring other clubs’ interest in a player hoping they either have no salary space to take the player, or do not wish to invest that amount of money in an untried rookie.

The Hawks were taking no chances with the midfielder who coach Sam Mitchell was very keen to secure after working closely with him as coach of the Box Hill Hawks.

Players who have not been on an AFL list are not permitted to nominate draft terms in the national draft, but the rules did not previously preclude them doing so in last year’s mid-season rookie draft.

The change brings the mid-season rookie draft rules into line with the national and rookie drafts.

Newcombe has been one of the successes of the mid-season draft as a hard tackling rugged midfielder who also finds plenty of the ball.

He played six games last year after being drafted and has played all seven games this season including a career-high 31 touches in the Easter Monday win over Geelong.

The AFL also informed clubs of some streamlining of medical testing rules for prospective draftees to avoid players having to do multiple medicals at multiple clubs in the lead up to drafts.