Toby Rudolf was the only Sharks player who didn’t touch the ball during the 10 minutes his side was down to just 11 players – yet he featured in one of the first video clips shown to players on Monday.

Technically, his involvement in the play was a missed tackle. But it meant so much more than that in the most improbable win of the year, described by NSW coach Brad Fittler as “one of the best club wins of all time”.

There was only a minute left before Jesse Ramien was due back on the field, Cronulla down to a comedic 11 players against a full complement of 13 from the Warriors, after Will Kennedy’s first-half send off.

Moments after being involved in a tackle on Warriors centre Rocco Berry, Rudolf sprints to the other side of the field and the big front-rower does just enough to slow down the speedy Viliami Vailea, who then crashes into Teig Wilton. Like Rudolf, Wilton was also involved in the Berry tackle more than 50 metres away.

“Toby shouldn’t have been there,” Sharks hooker Blayke Brailey says. “He’s a middle [forward], he’s played some big minutes and he’s a bigger boy against the athletic centres. For him to be there in that moment shows how far we’ve come as a team and how much we really respect the jersey. That sort of play just wrapped up the night.”

So, how did Craig Fitzgibbon’s side not only pull off one of the most astounding wins in the NRL era, but do it so comfortably while not yielding a point when two men short? 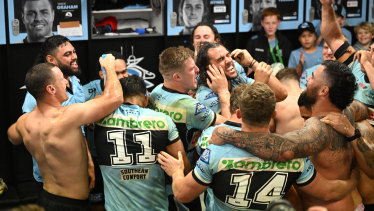 Toby Rudolf was at the centre of the the Sharks’ celebrations in the sheds after the improbable victory. Credit:NRL Photos

The win said just as much about the coach as his players, Fitzgibbon demanding his team still play an attacking style despite being undermanned. But it was always going to be their defence which would win them the game.

“But what happens in a situation like that is the pressure completely turns to the other team,” says Fittler, who has worked with Fitzgibbon in the Blues camp before he took the Sharks job. “The Warriors just looked like they didn’t have any control at all.”

It’s not uncommon for NRL teams to use the fullback in the defensive line when protecting their own try-line, even when they have 13 players on the field.

But it became imperative for Nicho Hynes, who moved to fullback to cover for Kennedy, to step up when the Warriors twice attacked inside the 30-metre area against 11 players. His position was like a swinging defender, rushing to either side of the ruck he sensed his side was short.

It’s almost like ghosting a defence to make them play a certain way. You give them looks where there isn’t really that much space

“You’ve got to take a bit more of a risk with two extra players out,” Brailey says. “I think those risks need to be calculated. It would be a step further than a position you’d normally be in.

“You have to get off the line a lot quicker than what you usually do to spook the defence and force them to go around you. It’s almost like ghosting a defence to make them play a certain way. You give them looks where there isn’t really that much space for the play.”

Former Rabbitohs and Broncos coach Anthony Seibold watched the game on television and shook his head at how quickly the panicked Warriors kept flinging the ball wide with the Sharks missing Kennedy and Ramien.

“You think the space is out wide, but that’s not where the space is,” Seibold says. “That’s fool’s gold. You should go through the middle to disrupt the defence and then that’s when the ball-players can make their decision. The Sharks just had their wingers marginally set back, so if a team kicks, the wingers have a bit of a head start behind. 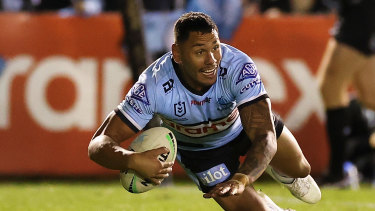 “But the Warriors were often shifting to a sideline, and that’s the easiest place to defend when you’ve only got 11 or 12 because you don’t have to make any decisions. The way the Warriors played against 11 or even 12 players was really poor.”

Fitzgibbon’s magic wasn’t just on the field, it was also coming from the coaching box.

Within three minutes of Ramien leaving the field, he threw his most dependable forward Dale Finucane back on and made another change, replacing Andrew Fifita, who came up with a huge play diving on a loose ball shortly after they were down to 11, with Rudolf.

Under NRL rules, a team’s blue shirt trainer is only allowed on the field three times per half to convey tactical messages. Cronulla’s runner, assistant coach Daniel Holdsworth, went on the field twice in almost as many minutes once Ramien was sin-binned to provide guidance and encouragement.

His message was for the Sharks to continue throwing the ball around in attack, and testing the Warriors when almost every other coach would be thinking about a safety-first, hang-on-for-dear-life philosophy.

In fact, in the 10 minutes the Sharks were down to just 11 men they threw a staggering seven offloads and actually had more time in possession (six minutes to four) than their opponents. Hynes threw three offloads alone while Ramien was off the field.

“We’re not really known for offloading a lot as a team, but they had some big middles in [Matt] Lodge and [Addin] Fonua-Blake and we knew we had to move them around,” Brailey says.

“When we went to 11 players we spoke about not going into our shells. It almost turned into a game we play at training where we’re down two players and you have just got to try different things and experiment to keep the defence guessing.

“Nicho, Matt Moylan and myself have played a lot of touch football so I probably think that side of it came out.”

And they even had the audacity to at one stage try the “slingshot” move without Kennedy and Ramien, a manoeuvre designed to create space outside a defensive line.

“If anything they’re one team where their personality has definitely changed,” Fittler says. “And that was one of the great club wins of all time.”