In today’s AFL briefing, your daily wrap of footy news:

Check back throughout the day for further updates.

Curnow inks long-term deal, could be a Blue for life

Carlton key forward Charlie Curnow has signed a six-year deal with the club, committing to be a Blue until at least the end of 2029.

Curnow had 12 months remaining on his existing deal, which would have taken him to free agency, but the Blues locked him in with a long-term contract extension that the club said he had “no hesitation” in signing. 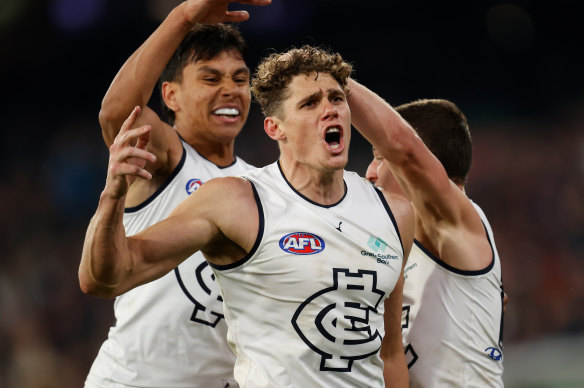 Star forward Charlie Curnow has committed his long-term future to the club.Credit:AFL Photos

The 25-year-old arrived at Ikon Park after being taken at No.12 in the 2015 national draft and has since played 83 senior games.

He missed the 2020 season and only played four games in 2021 but has had a breakout 2022 season, currently leading the Coleman Medal race on 62 goals.

Curnow said he’s committed to the long-term mindset of many in the playing group, making inking the deal an easy decision.

“This group started from day one together, we want to continue to grow together and ultimately we want to earn success together,” Curnow said.

“We’ve had a lot of players re-sign for the long term and their mindset is exactly the same as mine – let’s do this the right way, off the back of working hard for each other and for everyone we represent at this football club.

“It means so much to me to represent our guernsey. To wear that navy blue means we belong to something really special: there is no football club like ours, no fan base as passionate as ours and it is a privilege to represent Carlton each and every time I’m out there.”

Blues head of list management Nick Austin added that Curnow came to the club a year before he needed to and expressed his desire to stay with Carlton.

“[He] said he wanted to play for this football club and was not interested in any other offers – that tells you everything you need to know about who he is,” Austin said.

“Everyone sees what Charlie can do on the field, but it is what he brings to our football club off it which is what we really value and few get to see.”

Curnow’s partner in the forward line Harry McKay is also out of contract next year.