Western Bulldogs’ premiership coach Luke Beveridge has declared his young side has taken a “monumental” step in its pursuit of another flag after defeating a battle-hardened and experienced West Coast Eagles in a thriller on Sunday.

The Bulldogs stared down a brutal test from the Eagles at Marvel Stadium to win by seven points, despite trailing by two goals at three-quarter-time and five points with little over three minutes to play. 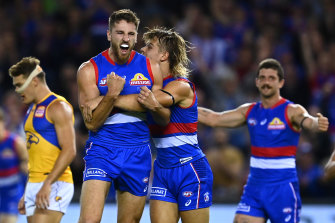 Even though the Dogs have now won the last two encounters between the sides, the Eagles had had their measure in the five clashes preceding them, not losing to Beveridge’s side after they were shocked at Subiaco in the classic 2016 elimination final encounter.

West Coast also have a good record at Marvel Stadium, and their precise kicking and aerial style – which is hard to stop given their wonderful forward line of Josh Kennedy, Liam Ryan, Jack Darling and Oscar Allen and the Bulldogs’ undersized defence – was not enough to beat Beveridge’s men.

“When the game was slipping away a little bit, and definitely at three-quarter-time, for our boys to collect their thoughts and come again is monumental for us,” Beveridge said. 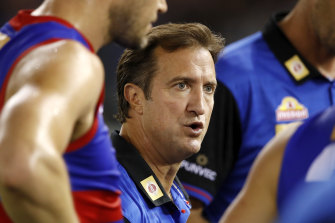 Luke Beveridge addresses the players during Sunday’s thrilling win over the Eagles.Credit:Getty Images

“It is such an important win on our journey and the passage we’re trying to dig out.

“Against this team, they force you to play a certain way with their strengths. Obviously, you’re trying to play to your own.

“The application to the task, things were going our way at different times without maybe getting the rewards and as they do, the Eagles they’ll hang in there and they’ll force the issue at different points.”

He conceded some wins were worth more than others, and the way he spoke about this one suggested it fell into the more valuable category.

“Our team is continuing to change and evolve and that 22 plus JJ [Jason Johannisen], who we didn’t call upon, haven’t played much footy together. We have got a couple key defenders, Alex [Keath] played his 50th game today and Gards [Ryan Gardner] still played under 20 games. And some guys in our forward line even haven’t played much footy together.

“There’s no doubt when the game was really on the line that group who are in the engine room and who are our prime movers, who play really important roles in the momentum of any game, really picked up the bit and forced themselves upon the end result.”

He singled out Marcus Bontempelli for praise. The skipper kicked three wonderful and crucial goals, the last just before the final siren to ice the game. He also had 30 touches (28 effective), plus 14 score involvements, five clearances and seven inside 50s.

“Just what he did in the last quarter … there’s no doubt her gave us really significant momentum and really swung us and sparked us into action,” the coach said.

The Bulldogs play the struggling North Melbourne next week but Beveridge said it was crucial his team remains single-minded in its focus.

“Our mindset can’t change. It needs to stay exactly the same. Apply ourselves to get the most out of ourselves,” he said.

“They [West Coast] are such a tough opponent. It is a very satisfying and rewarding day.”

Tags: ‘Monumental’:, Beveridge, lauds
You may also like
Latest Posts