Collingwood coach Nathan Buckley has “re-schooled” the team’s defence in an attempt to save the Pies’ season, with Darcy Moore also returning to defence.

Buckley admitted on Thursday that his side has spent the week going back to their defensive patterns of previous seasons in the hope they can regain the style of play that helped them play finals in the past three seasons. 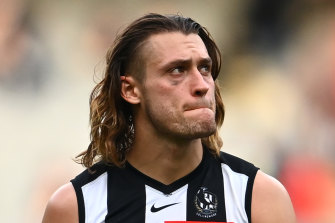 Darcy Moore will move back to defence this weekend.Credit:Getty Images

The moves come ahead of a clash with bottom side North Melbourne on Saturday, where a loss would bring even more scrutiny on Buckley’s future as coach and how the side can re-tool for the future.

Buckley said the move back to a defensive style was born out of the team’s 1-6 start to the season.

“We haven’t been sitting on our hands, we have been trying to find solutions that will work for us and this week we realised that, in the end, when there are so many things you feel you can fix, you go back to what you know,” Buckley said.

“The connection to us as a group is important, we have tipped time into that. And we’ve re-schooled our defensive shape.

“So that is largely where our focus has been and where we hope to effectively get the game on our terms – from that phase of the game.

“It hasn’t been consistent enough this year, it’s been a strong point of ours over a number of years but that is then, this is now. We need to improve our defensive actions and give ourselves the chance to play the game in our front half.”

Buckley hasn’t completely given up on the concept of Moore as a forward but has gone for the most immediate need, which is to batten down the hatches in defence.

“Darcy will go back,” Buckley said.

“The last three weeks, that trial to look at that, has given us some information and not all the information we were looking for in a positive sense. Darcy is one member of our team. He’s not the be-all and end-all.

“He’s a very good footballer, he has played some exceptional football behind the ball but we’ve seen breakout performances in losing teams from Darcy Cameron and Brody Mihocek and we think Darcy’s presence has assisted in that regard.

“But with a defensive focus for us, once we stripped that back, it was really clear that Darcy behind the ball makes us a better defensive team.”

Defender Jeremy Howe has been ruled out for this week due to needing complete more “volume” running following his hamstring injury, while Levi Greenwood and Mason Cox could make returns to the side although Greenwood didn’t train Thursday.

Buckley wanted more from his senior players but wouldn’t address speculation about the team or Jordan De Goey’s talking-to from some of his teammates. 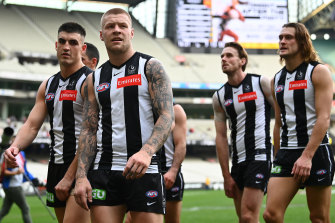 The Pies leave the field after their loss to Gold Coast in round seven.Credit:Getty Images

“We support Jordy absolutely. He is a young man who is trying to contribute to the club as best he can and he is one of 45 other young men and the staff that is extended from that. Whatever we do, win, lose or draw we will do it together and we won’t carve anyone away.

“Feeding into that narrative is not something I want to do.”

Buckley said the group was “looking after one another”.

“Externally there are people looking for answers but ultimately we come back as a group and are looking after one another,” he said.

“This is not an easy caper. The only answer is to work hard, come back to each other, find some light and shade in your week and we control what happens in our four walls, not what happens outside of that.

“We understand what we are seeing externally is largely regarding our win-loss ratio, there is a quick way to fix that and that is to play better footy.”

Tags: back, defence, go, Moore, S, to
You may also like
Latest Posts