Lachlan Miller says his NRL debut on Sunday will be the highlight of his career, which is saying something given he’s an Olympian.

“It’s definitely at the top,” Miller said. “The Olympics was really special, and I won’t ever deny that, but just to fulfil a lifelong dream – when I was younger I always wanted to play NRL – is pretty special.

“This has always been a dream of mine since I picked up the football when I was about eight or so.

“It’s been quite a long journey. I went to rugby union and then made the switch back. This is one I definitely won’t forget.”

Miller will become Shark No.550 when he runs out at fullback in Sunday’s clash against the Gold Coast. The 27-year-old represented Australia in rugby sevens at the Tokyo Games, but his ultimate ambition was to play in the NRL.

He thought the opportunity had passed him by after all the NRL clubs declined his services last year, leaving him just two hours away from signing a contract with American rugby franchise LA Giltinis. However, a timely phone call from Cronulla coach Craig Fitzgibbon changed everything.

“I thought the dream had passed.”

“I was very interested in coming back to league, but there was not much interest from clubs to have me in there,” Miller said. “I thought the dream had passed. But then Fitzy and [general manager of football] Darren Mooney gave me a call and they were full of support and keen to get me to the club.

“From their first call, they were really excited and wanted me to come. From then, it was a pretty easy decision to jump back in. 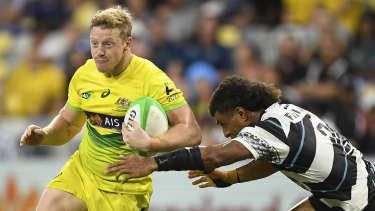 From the Olympics to the NRL: Lachlan Miller can’t wait to make an impact at Cronulla.Credit:Getty

“I was thanking [Fitzgibbon] for taking the risk and he said: ‘It’s no risk. Let’s build on this because it’s not a risk in our eyes’.

“The confidence he showed early on helped me get through the first half of my first year. It’s been really good.”

Miller will get his chance in the No.1 jersey after Nicho Hynes, who had filled in for the suspended Will Kennedy last week, was switched back to the halves. The move will pit Miller against exciting Titans custodian Jayden Campbell.

“I watched him last week and he was in pretty red-hot form,” Miller said. “Obviously, they are big shoes to fill for Will Kennedy, who in my eyes is one of the best in the comp, but I’m really excited to bring my own twist on it. I’ll do whatever I can for the Sharks on the weekend.”

The Sharks were attracted by the versatility of Miller, who can play any position in the back line. The NSW North Coast product, who has split his time between fullback and the halves for feeder team Newtown, only learnt of his elevation just before the team lists were released on Tuesday afternoon.

“It was pretty hard to keep the smile off my face,” he said. “I was out buying a coffee and would have looked like a bit of a weirdo.” 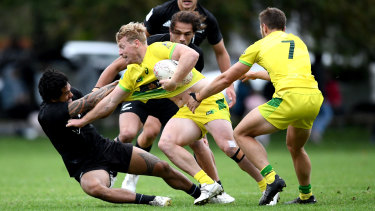 Miller had the opportunity to live in America and continue representing Australia in sevens. However, his Cronulla call-up has vindicated his decision to switch codes.

“Regardless of the outcome, I’ve had a lot of fun so far and learnt a lot of things,” he said.

“I wouldn’t change it, the chance to come back to league, it’s been the best decision I’ve made for a long time.

“It’s also been great for my family to move to Cronulla; everyone is enjoying themselves.

“The club has been really helpful for me and my family. It’s felt like family since I got there.