Melbourne Storm have ended a frustrating season with a moment of triumph, re-signing star playmaker Cameron Munster to a four-year extension.

The 28-year-old has spent the whole season in the spotlight after reports that expansion club The Dolphins were going to offer Munster a life-changing contract to return home to Queensland with his partner Bianca and preschool-aged son Jaxson. 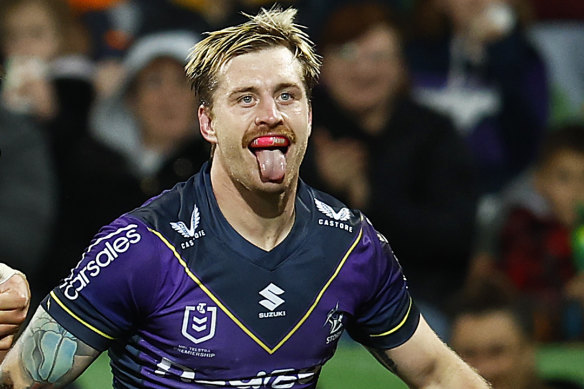 Storm for life: Cameron Munster has signed for the long term with Melbourne.Credit:Getty

Munster appeared open to the offer but didn’t rule out remaining with the Storm, who signed him from obscurity from country Queensland as a teenager.

Now the two-time premiership winner is poised to be a Storm player for life, the new deal to run until the end of the 2027 season.

Munster arrived at the Storm looking to learn the finer points of the game from Cameron Smith and Billy Slater. Now he is in a position to finish his career as the player others move south to learn from.

Munster hinted at his decision while speaking about the upcoming Rugby League World Cup this week, stating he wanted to make sure whoever he signed with were able of competing for premierships.

“I love the Melbourne Storm and I am proud to be committing to the club for a further four years,” Munster said on Thursday night.

“The club has always been supportive of me, even through some of the more difficult times, and I appreciate Trippy [Matt Tripp], Justin [Rodski] , Frank [Ponissi] and Craig [Bellamy] giving me the time I needed to think through the decision with Bianca and my family.

“I’ve always wanted to be a one-club player. Storm gave me the chance to play NRL and the club has become a second home for me since making my debut.

“Both Bianca and I have family back in Queensland but we are settled in Melbourne, we have a great support network and we look forward to growing our young family in the years to come.”

Storm chairman Matt Tripp said Munster had made a wise decision and had come a long way in the past year.

“Cameron has matured a lot on and off the field over the last 12 months,” Tripp said

“Most importantly, Cameron has never been in a better place in his life, he is happy, healthy and settled with his young family, and we are thrilled he has decided to remain with the Storm and will become a one-club player.

“We are so lucky to have a player like Cameron – a generational player – committed to our Club and our city for another four years.”