Star playmaker Cameron Munster is expected to reaffirm his commitment to Melbourne on Saturday, shutting down talk of him shifting to the Dolphins for the 2023 NRL season.

He will not though make an announcement on his playing future beyond that at a press conference called by the club, which coach Craig Bellamy is expected to attend. 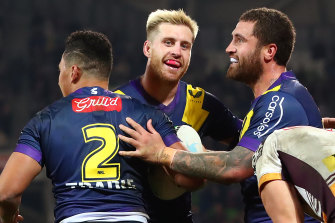 Melbourne Storm have locked in Cameron Munster for 2023.Credit:Getty

Dolphins coach Wayne Bennett raised the ire of the Storm with his comments on radio on Friday suggesting the Queensland State of Origin five-eighth could join the new NRL club for their inaugural season next year.

The Storm have made a formal complaint to the NRL that the Dolphins are inducing the 27-year-old to break his contract.

Munster is contracted to Melbourne for 2023 and is unable to sign with another club until November 1.

Melbourne have declared they will not release him from the final year of his deal even if he signs to play elsewhere in 2024.

They have held Brandon Smith to his contract this season despite the Kiwi rake signing to play with the Sydney Roosters in 2023.

They remain hopeful Munster, who has played 164 games since his 2014 debut, will see out his career with the club.

Munster missed Melbourne’s ugly loss to Manly on Thursday night with a shoulder injury but is expected to be declared fit for the Origin decider in Brisbane.