Speaking on Friday, at her old home of North Melbourne Football Club, the club she played and coached for with distinction, Dani Laidley spoke of the two tribes that she was representing.

“I’m very proud today. It’s probably the first time I’ve represented my old tribe and my new tribe,” said the former coach, whose reference to her “new tribe” seemed to mean that was she was, for the first time, metaphorically wearing the colours of her transgender identity as well as North Melbourne’s blue and white. 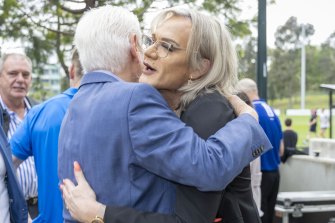 Dani Laidley has been embraced by her former teammates and club.Credit:Wayne Taylor

On this occasion, Laidley spoke about the club’s transformation from debt-ridden to fiscally stronger, of how there were once “rats running across my desk” when she was senior coach at a less modern facility, and of her work as a groundsman in her days as a player, when Dani – then Dean Laidley – had come across from the West Coast Eagles.

Laidley’s own transformation, of course, was visible and had been a matter of enormous public interest since autumn of last year – and, in due course, will be the subject of a book and a documentary, some of Dani’s movements and meetings having been filmed with a view telling her unique story.

Laidley was there at North’s Arden St headquarters, along with her successor as North’s senior coach, Brad Scott, and current coach David Noble for the club’s trumpeting of its debt demolition; she was there, simply because, like the other coaches, presidents and benefactors, she had played her part in the club’s emancipation from the existential threat of debt.

There was a palpable sense here that North were acknowledging their debt to Laidley – and dozens of others – who had helped the club survive. 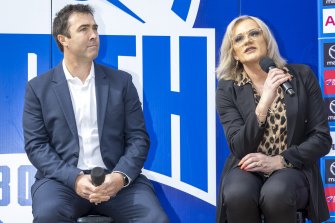 Laidley with her successor as coach, Brad Scott.Credit:Wayne Taylor

The unspoken flipside was that North Melbourne’s family had been crucial in helping their former coach navigate the traumatic events of the past 18 months, and especially the period from May last year following her arrest and the leaking of photographs of her in the garb of a woman by Victoria Police.

It cannot be said that Laidley was suddenly “back in the fold” on Friday, because, in reality, the North Melbourne tribe had never left her. 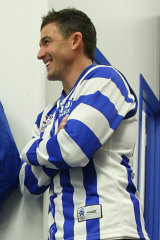 In the 18 or so months since those leaked photographs of Laidley went viral – prompting criminal charges against police and a lawsuit that is nearing settlement – a coterie of teammates and ex-North players or officials, headed by former skipper Anthony Stevens and ex-player and board member Mark Brayshaw (who was then head of the AFL coaches association), have helped Laidley deal with her legal, medical, mental health and complex personal challenges.

In the days following Laidley’s arrest on drug and stalking charges – charges that were utterly overshadowed by the damaging leaked photographs – a collection of North Melbourne people formed what chief executive Ben Amarfio called “a coalition” to assist Laidley in her nadir.

Stevens and Brayshaw were key figures, along with club legal adviser Andrew Harris, who organised for leading criminal lawyer Rob Stary, to act for Laidley. She would end up with a diversion order for the drug charge and recorded no conviction for the stalking charge.

But the first priority would be Laidley’s health, the former coach having a drug problem that required treatment – she would spend weeks in a clinic down in Geelong – and accompanying mental health issues.

As a number of North Melbourne people involved with Laidley have testified, the support of Stevens, in particular, has been well beyond the norm. It was Stevens, after all, who took Laidley to the Geelong races recently, where she was subject to another apparent police breach when a photograph was again disseminated by an officer.

Brayshaw, whose brother, the ex-club president James Brayshaw singled out Laidley’s contribution to the club avoiding relocation to the Gold Coast, himself highlights what Stevens, who was captain of North when Laidley was in his first years as coach, has done for Laidley.

“Stevo stood up to his full height,” said Brayshaw, recalling how the former captain of North and head of their past players, had been at Laidley’s side in what Brayshaw called “the journey from that photograph to today”.

When Stary was handed the task of defending Laidley against the stalking and drug charges, he had not anticipated that “old school” ex-footballers – Glenn Archer in addition to Stevens and Brayshaw – to be as steadfast, or unconditional, in backing a transgender person who had found trouble.

“I found it to be one of the most remarkable things I’ve witnessed,” said Stary, who had told the court that Laidley had known, since her adolescence, that “there was an issue in terms of her gender assignment”.

According to others familiar with Laidley’s situation, Brayshaw’s crucial role included taking part in or organising for the former coach to meet and greet numerous ex-team mates – from Wayne Carey, and West Coast coach Adam Simpson and Fremantle football boss Peter Bell (all premiership teammates) who met her in Perth.

Brayshaw also took Laidley to a meeting with AFL boss Gillon McLachlan and his then football lieutenant Steve Hocking. The AFL view is that Laidley is probably the highest profile transgender figure in Australia and, as such, that she can be an important advocate for tolerance and diversity.

On the day when Laidley sat alongside fellow coaches and spoke with calm confidence, Amarfio expressed pride in the way North people had been in the trenches with Laidley, while the club also acknowledged – as in the charges she had faced – that other parties had to be respected as well.

“It’s been well documented that Danielle went through some pretty tough times last year and clearly we share concern for all the parties involved in her past legal matters.

“But I’m really proud of the fact past and present club figures didn’t hesitate to take strong and swift action to help Dani in her greatest time of need. Former teammates, past administrators, player managers, assistant coaches – people came from everywhere without being asked twice.

“It’s been said many times that footy clubs are often like families – parents, siblings, grandparents don’t condone harmful behaviour but they don’t shun their own. They wrap their arms around them and help them get back on their feet, heal and learn from their mistakes.

“I know Dani is very grateful for the support she received from all corners of North Melbourne but she’s one of us. Few people have contributed more to this club – premiership player, assistant coach, senior coach. We’re so proud of the strides she’s made in a short time and, quite simply, we’re happy she’s happy.“”

While Stary and others were surprised at the touching level of support that Laidley received from his tribe, Hannah Mouncey – the former Australian handball team player who sought, unsuccessfully, to enter the AFLW (initially blocked from the draft), was not surprised, since this had been her experience with fellow (male) athletes.

“My experience was exactly the same,” said Mouncey. “I thought there would be some of them who have issues with it. I was terrified.”

Mouncey observed that trans people are “incredibly vulnerable” and noted that the importance of the AFL itself supporting Laidley. 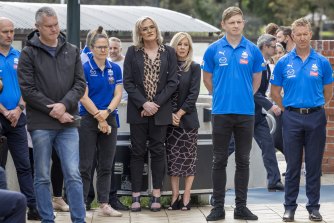 Dani Laidley, with her tribe at North Melbourne.Credit:Wayne Taylor

“She’s had a very different experience [to Mouncey] because the AFL has been very positive.”

Mouncey contrasted the AFL’s failure to defend her against online attacks. “They never came out and said transphobic abuse wasn’t OK. They never checked in to see if I was OK.”

Laidley’s advantage – evident on Friday and throughout his transformation – is that, unlike Mouncey, he’s part of the tribe.