Forget the departure of star halfback Mitchell Pearce at the end of last season, David Klemmer’s on-field blow-up or Newcastle’s strange obsession with players and coaches linked to banned manager Isaac Moses, a major reason coach Adam O’Brien and the Knights are in free fall is the loss of O’Brien’s right-hand man, the mysterious Kannon Rajah.

At a time when most coaches have a coach, Rajah was the man O’Brien and the playing group would lean on for wise counsel when dealing with tricky situations. Whether it was how to handle a run of losses or a challenging media appearance, Rajah was the go-to man for the under-fire Knights.

Rajah doesn’t seek the limelight, and you won’t find him with his own public relations team or website explaining what he does, but those who know him believe in his value. He has had ties to many high-profile players in the game and regularly talks with coaches and executives in the NRL.

He is linked to the famous Wim Hof (the Dutch motivational speaker who is also known as The Iceman), and when he was in Sydney pre-COVID, Rajah had coaches Trent Robinson, Brad Fittler, Jason Demetriou and Michael Cheika, among others, listening for hours. Rajah is well known for being a director of the Victoria’s Secret fashion shows in New York, Los Angeles, Miami, London and Shanghai.

No one outside the Knights knew of Rajah’s work with O’Brien. He existed in the shadows and on the phone, but for reasons best known to the Knights, he was shown the door. He was seen as a threat by some at the club. The club’s messaging and approach to football have been off since his departure. There was a contract being prepared for him, but it was suddenly withdrawn. 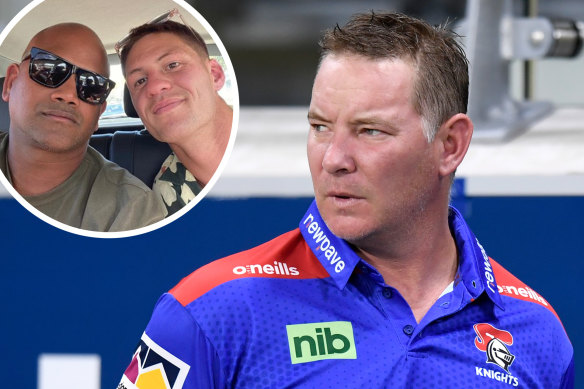 Klemmer’s frustration at being taken off last weekend is the tip of the iceberg when it comes to Newcastle. There has been unease in the playing group for some time.

Connor Watson was a favourite among teammates, but the Knights made him a low offer to stay and he swiftly returned to the Roosters. Next to go was Pearce, who was offered a one-year extension before being allowed to leave to join Catalans. Both were leaders in the playing group and it is obvious that leadership is an area where the Knights are sorely lacking.

Another point of debate has been the influence of banned manager Moses. He represents the coach and assistant coach Blake Green. Knights recruitment boss Clint Zammit is a former employee of Moses. There are a host of players managed by Moses’ company, Cove Agency.

Brisbane, Parramatta and the Warriors have all had issues when stacked with players or coaches linked to Moses.

Ian Roberts has shown considerable tolerance and understanding of the “Manly seven”, saying “it would be a kick in the guts” if the NRL failed to introduce a Pride Round next year.

Seven Sea Eagles players refused to wear a rainbow jersey designed to promote inclusivity against the Roosters and so did not play.

“We have just been through all that shit and, I’m not like vilifying the seven guys, I believe it’s a conversation that you have to have,” Roberts said. “We have to be mature. I’m confident and hopeful but, of course, just worried that pushback is going to derail and scare people. It’s time for the NRL to stand up and back this. Having a float in the Mardi Gras is box ticking in my eyes. It’s great, but it’s a toe in the water. It’s time to jump right in there.

“This is about showing support for young kids, and the catastrophic consequences we face if we don’t. Like it or not but sport has power to change things in society. It’s been that way for a long time. Look at the black power stance at the Olympics. This has been going on for a long time.”

Critics of the Manly players have wanted to know exactly why they have taken their stance. Members of the group have told me they were certainly not doing it because they are homophobic, and Roberts wants to believe that.

“I would think they are probably unaware of the significance and the potential consequences of their actions,” he said.

“I really don’t believe they would be thinking like that or hiding behind their religion. They could not be that ruthless. I don’t think the seven boys could possibly have been aware of everything and everyone they impact. That’s why I’d like to talk to them. To tell them about my experience and other people’s. It’s probably something they have not had to consider.”

Perrottet checked out when NRL checked in

The ARL Commission’s decision to spend $25 million on a hotel in Brisbane ended any chance it had of securing millions of dollars for suburban stadiums in Sydney.

I have been told the NSW government was already agonising about whether it was politically viable to honour its promise to provide more NRL stadium funding, well before the issue blew up during the week. With the floods wiping out so many homes and businesses in and around Lismore in the Northern Rivers region, and other areas of the state, it was a difficult sell for Premier Dominic Perrottet.

The NRL says it is manipulative to use human tragedy to get out of a deal, and anyone in the NRL’s box at Origin III at Suncorp Stadium in July would have been aware of the handshake deal. Perrottet was reminded of his commitment in front of those present. The notion of hosting the grand final in Brisbane was also raised.

The NRL concedes it has been outplayed, but the Lismore excuse is “dirty pool” in its view. However, it became impossible for the government to justify spending on stadiums after the NRL publicly celebrated purchasing the Gambaro Hotel close to Suncorp Stadium. Here was a private business demanding millions of dollars in taxpayers’ money, while saying it was in such great financial shape it could afford a hotel.

Television coverage featured players boasting about having their own hotel, complete with themed rooms to honour the biggest stars. What’s more, the ARLC relied on a handshake deal to upgrade the stadiums rather than getting it in writing, making it easy for the state government to back out. ARLC chairman Peter V’landys needs to realise not everyone operates with his honour.

The big problem for the ARLC is the NSW government is unlikely to revisit the stadiums proposal after this week’s public brawl. It’s a salient lesson for the ARLC and V’landys that you can’t cry poor and flaunt your wealth at the same time.

It’s hard to see Michael Maguire and Tim Sheens ever sitting down for a pleasant conversation again.

Maguire, who was sacked by Wests Tigers in early June, is back in town after a European getaway, which included time in France and on a friend’s super yacht.

As relaxing as that sounds, it’s hard to forget the way he was sacked. The man who was brought in to help him, Sheens, has replaced him. It’s an awful look for the Tigers, and one that doesn’t sit comfortably with Maguire, or the people who still think he can coach.

When Sheens came on board, Maguire accepted it in the hope that he was there to make his life better. For Sheens to replace him is very hard to accept for even the most passionate of Maguire haters.

However, you won’t read this kind of criticism in the News Corp press as they are claiming the Sheens elevation to head coach as their doing. So he is getting a free ride, unlike Maguire, who lived on the edge as a wave of attacks were launched. Maguire is preparing for the World Cup with New Zealand (who are ranked No.1), doing some work on himself and keeping an eye on the coaching developments at various clubs. 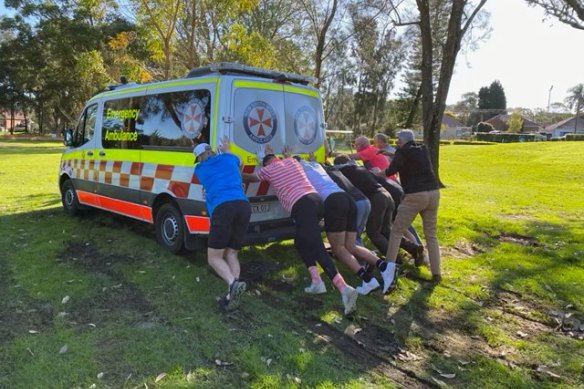 Bulldogs players push an ambulance out of the mud on a golf course.

The Bulldogs have shown some good signs on the field, and they’ve been putting in off the field, too.

Canterbury players jumped to the aid of an ambulance crew that was bogged on a golf course during the week. Matt Burton, Ryan Gray, Braidon Burns and Kurtis Morrin were playing at Beverley Park Golf Club and hurried across three fairways to help out. A golfer suffered an elbow dislocation after a fall. The help was greatly appreciated.

Matt Lodge has been trying to repair his reputation for years. Now his sister Kaitlyn is trying to make a mark in sport as a boxer. After seven amateur fights, she is turning pro and chasing a world title.

“I started at the gym maybe two-and-a-half years ago just to lose weight and my coach said how about we try having an amateur fight,” she said. “Now my pro debut is the 10th of September on the Gairy St Clair Superhero Pro Fight Night at Rooty Hill, and it’s for a world title in the World Boxing League. 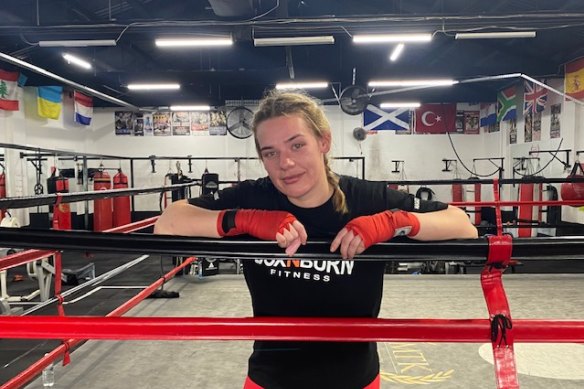 “I’m a super-welterweight and I feel like I’m on a great path. I wasn’t really into sport until this, but I think I like the challenge. It’s very structured and disciplined. That’s what I like. Growing up I’ve always been a bit of a hothead, but this has actually calmed me down a lot. Now it’s just in the ring. You get all that out.”

Kaitlyn says she has drawn inspiration from her brother’s on-field exploits.

“I never understood about that and now it’s like I understand why he does it. So he’s been pretty inspiring. He’s helped me out a lot. He’s very supportive.”