As the AFL finals season kicks off, another battle is taking place behind closed doors. The AFL is in the final stages of negotiations for the right to show matches for five years from 2025. It’s a high-stakes contest that pits every free-to-air network and pay TV company Foxtel against each other.

The final deal will be worth hundreds of millions of dollars each year. It is the financial lifeblood of the AFL and the many people who rely on it. While the money being offered by the various rivals will be a decisive factor, the most contentious issue might be how many games will be aired free and how many put behind a paywall, and in what states. 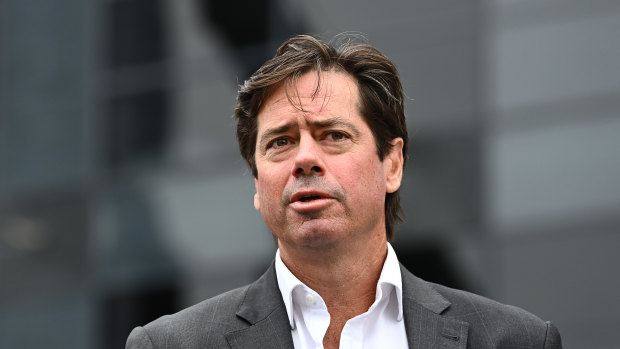 Gillon McLachlan is in the process of securing a new TV rights deal for the AFL.Credit:Getty Images

The current rights, owned by Seven and Foxtel, run until the end of 2024 and are worth $946 million to the AFL over two years. Foxtel pays the larger share and is increasingly transitioning matches to its streaming arm, Kayo. Across the home-and-away season, the deal averages about 3½ matches free on Seven and 5½ games (from a nine-game round) on Foxtel and Kayo.

While Nine (the owner of The Age) and Ten are still believed to be in the running, sources with knowledge of the negotiations have told The Age’s media reporter Zoe Samios that the AFL is seriously considering a renewed deal with its incumbent partners. But the two media companies are at loggerheads over key elements of a future arrangement, including the number of live matches shown free-to-air. Samios’ sources have said the AFL is open to allowing Seven to stream its games on its free online service 7Plus and, in return, Foxtel is pushing for a “Super Saturday”, during which it would have exclusive rights to home-and-away matches on Saturdays. There is also talk that more AFL games outside Victoria could be shown live exclusively on Foxtel and on a delay of up to two hours on Seven, or that Foxtel could win the right to show more live matches of local teams in Adelaide and Perth.

The possibility of fewer free-to-air games has been met with stiff opposition. Communications Minister Michelle Rowland raised her concerns about the plan with the league’s top executives, while WA Premier Mark McGowan said he believed it would be a “sad day for Australia if people lost the opportunity to watch the football for free”. Port Adelaide chairman David Koch said South Australian and West Australian fans would be furious if they were forced to pay to watch their team.

The Age can only agree. There is no doubt that much of what is driving the negotiations is the AFL’s attempts to extract maximum dollars from the deal. It is hoping to get close to $600 million a year, which would equate to up to $3 billion for the five-year deal. After taking a big financial hit during the worst of the pandemic when crowds were locked out, and with increased demands for money from struggling clubs and players in both the AFL and AFLW, the league is under pressure to secure the best financial deal it can from its broadcast rights holders.

But for the long-term financial and grassroots health of the league, the number-one priority must be the supporters who week after week either go to the game or watch it on TV. As the pandemic showed, football without a crowd is a shadow of the spectacle it can be. The future of the sport hinges on AFL being a mass-participation element of Victoria’s cultural life, and if sport lovers find it difficult to watch the top level of the game at home in prime time, they may begin to lose interest in it. As the AFL negotiates this deal, we believe that supporters should take precedence over a few extra million dollars on the bottom line.

Gay Alcorn sends an exclusive newsletter to subscribers each week. Sign up to receive her Note from the Editor.