Top draft pick Matthew Rowell has further enhanced his claims for a round one AFL debut with a solid display in Gold Coast's pre-season win over Geelong. 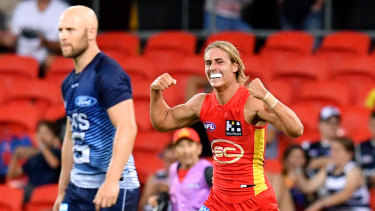 The 18-year-old was a bright spark throughout the match, in his second hitout against AFL opposition after playing in a scratch match last weekend against Brisbane.

Rowell was one of several recruits to do well in the Suns squad as they outran and outplayed the Cats.

Fellow draftee and best mate Noah Anderson kicked a goal in the third quarter and finished the game with 14 disposals.

There were also goals for fellow draftees Connor Budarick and Jeremy Sharp in the big win. 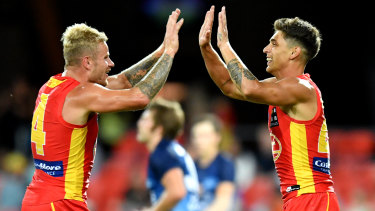 Ex-Richmond premiership player Brandon Ellis made his first appearance for his new club, picking up 22 disposals in a solid showing while former Adelaide midfielder Hugh Greenwood (25 disposals, nine tackles) showed some classy touches in his first game for the Suns as well.

Darcy MacPherson led the disposals for the game with 31 touches while Ben Ainsworth kicked a goal and made nine tackles.

The Cats fielded four players getting their first taste against AFL opposition but Ben Jarvis, Jacob Kennerley, Brad Close and Cooper Stephens all struggled to make an impact in a well-beaten team. 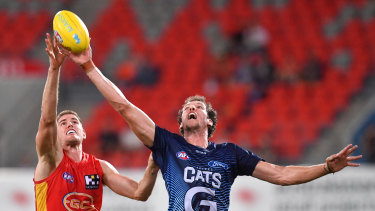 Gary Rohan picked up three goals for the visitors while Quinton Narkle had 26 disposals.

Gary Ablett also had a quiet night in his final visit to the Gold Coast, notching just eight touches.

Geelong's final pre-season game will be against Essendon in Colac on March 9 while the Suns travel to Adelaide to play the Crows on March 6.

Tags: as, cla, new, recruits, shine, Suns
You may also like
Latest Posts