Alastair Clarkson says footy would be higher scoring if the AFL reduced teams to 16 players a side, after former Fremantle and St Kilda coach Ross Lyon told The Age the league should implement such a measure.

Clarkson, who also conceded he was one of the coaches who had contributed to the recent trend of lower scoring in the AFL, said scoring would only increase if the league legislated for it rather than coaches committing to play more attacking game styles. 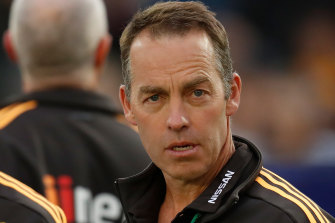 Clarkson is one of the coaches, through his ‘Clarko’s Cluster’ zone, who contributed to the low-scoring trend in the AFL. Credit:Getty Images

"No club plays 'one v one' anymore. It's all zones," Clarkson told SEN radio. "That type of zoning and connection between one another to defend has become very sophisticated across all teams. The upshot of that is no bugger can score anymore.

"I can remember the old VFA when they did have 16-per-team and looking up the paper and on Sunday the VFA would play and I'd always look up the results because there was full forwards kicking 15 or 18 goals a game.

"We have to consider pulling some levers on the game. One of the charters of the game is we wanted to retain 18 v 18. If defences have become so sophisticated in being able to use 18 men to defend, I wonder if they could defend as well with 16. Probably not."

He said if those changes weren't favoured, umpiring interpretations could be tweaked to open up play.

"It's not about trying to get it back to that. Is it, [do] we go 16-a-side, do we employ zones? If we don't do any of those two things, then we probably need to look at the way the game's officiated and say to ourselves: 'How can we reduce the congestion?'"

"Do we reward holding the ball more regularly, so we don't have three, four or five stoppages in a row where as many as 20 players get to that area of the ground and congest it?

"It's not going to take one coach … there's no one that's going to be a maverick like that and retain their status in the game as a coach if they just consistently lose.

"It needs to be something the competition mandates, in my view."

Clarkson said there was still excitment in the current game, however.

"The excitement … in the game now is who can break out of the bubble, like Brisbane, then have it spit into space so Charlie Cameron can sprint ahead of everyone else, get the footy and kick a scintillating goal. That's about the only genuine excitement that we're seeing in our game at the moment," he said.

Tags: 'No, anymore':, bugger, can, score
You may also like
Latest Posts