With the crowd roaring and Melbourne Storm up 22-0 against the NRL premiership favourite South Sydney Rabbitohs, there was a moment in Thursday night’s season-opener where you wondered if the Storm might be better without retired legend Cameron Smith. 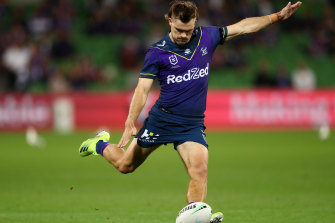 Within two minutes Munster was over for the first try of 2021 and Papenhuyzen converted his first kick as Smith’s replacement.

On nine minutes Josh Addo-Carr broke down the left wing, kicked inside to Hughes with the ball eventually finding Justin Olam who powered over.

Papenhuyzen and Kenny Bromwich exchanged flat passes on 16 minutes with the Storm fullback sliding up the posts so close to the ground he could have kissed the AAMI Park turf and he made it a double soon after dummying wide and then sprinting into the corner for the try.

With a 22-0 lead, it seemed the Rabbitohs were destined for a thrashing but the Storm started to show signs of fatigue and they couldn’t stop the dangerous Latrell Mitchell from drifting to the left edge where he found winger Alex Johnston unmarked for a try.

The Storm were up 22-6 at half time but after a shortened pre-season the fear was they would fade in the second half.

Papenhuyzen booted a penalty goal to add two points but Johnston scored his second try and just before the hour mark Mitchell again raided down the left edge and scored a try of his own to cut the lead to 24-18.

Papenhuyzen added two more points after Souths hit Hughes late after he kicked the ball while on the hour mark the Storm sent debutante Tyson Smoothy on to replace hooker Brandon Smith, he greeted the first-gamer with a bear-hug as he came off.

Souths tried to find a way through again but the home side held strong while some untimely errors equally denied the Rabbitohs of more chances to score. 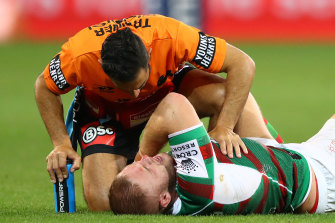 With four minutes to play Rabbitohs forward Thomas Burgess took a blow to the top of the head and felt for his neck, the game was delayed several minutes while he was stretchered from the field.

When the game resumed the Storm held on to claim the win.

They aren’t better with Cameron Smith but they clearly have the talent to begin a new era without him.

Tags: 'No, a, Cameron, Smith, worries
You may also like
Latest Posts