Wallabies and former Waratahs captain Michael Hooper says he has "no regrets" about his handling of teammate Israel Folau's sacking last year.

Hooper was named in court documents, published earlier this week, which outlined the concerns of senior players Sekope Kepu and Samu Kerevi. 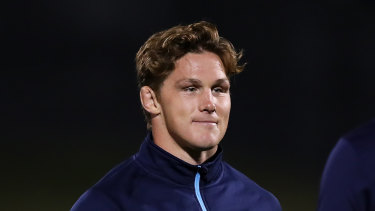 Kepu claimed he was dismayed by Rugby Australia and the Waratahs' decision to sack Folau over a second round of anti-gay social media posts and raised his concerns with Hooper, then-Waratahs coach Daryl Gibson, then-Wallabies coach Michael Cheika and RA chief executive Raelene Castle.

Kepu also claimed both organisations were briefing the media to only approach supporters of Folau's sacking and that the Waratahs had cancelled his appearance at a media opportunity, leading him to feel Christian players in the teams were being prevented from speaking  in support of the decorated fullback.

Hooper pushed back on Kepu's claims on Thursday, saying it was each player's choice what they said and when.

"I was never in those conversations (between media managers and individual players), but like I said, with this stuff, you're the person at the end of the day who gets up and speaks or chooses not to speak," he said.

Hooper made his first public comments about the matter on April 15, five days after Folau posted the offending Tweet and an Instagram meme. Folau was stood down from all duties and would play no further part in the Waratahs or Wallabies 2019 campaigns after a code of conduct tribunal found his comments warranted his sacking.

I've got no regrets. It's our choice to stand here and speak or not.

Hooper appeared with Gibson and was joined at the last minute by Cheika, who made the call to help absorb some of the media attention at the Waratahs' first media opportunity after the controversial posts.

The then NSW captain was asked whether he would be comfortable taking the field with Folau and responded: "Like was said before, in this current state and being here and talking about this as a rugby player, it makes it hard, it makes it difficult."

In Kepu's court affidavit, which was lodged with the Federal Circuit Court as part of Folau's unlawful sacking case against his former employers, the highly experienced and respected prop said he was deeply upset by Hooper's comments.

"I told him that what he had said to the media had really upset me and had really upset other Polynesian members of the teams," Kepu stated. "He told me that he had felt 'under the pump' to say what he said and that it had been 'taken out of context'. I took this to mean that he had
made his comments on 15 April 2019 because management had wanted him to do so."

Speaking at the Waratahs' captain's run at Bankwest Stadium, Hooper said he would not change what he said.

"I've got no regrets. It's our choice to stand here and speak or not. I stood there and spoke, I'm standing here today," he said.

The Herald contacted Kepu privately on April 17 but received no response, except from a Rugby Australia spokesman who expressed his displeasure that contact had been made. In May he, Tolu Latu, Tatafu Polota-Nau and Taniela Tupou all made Instagram posts wishing Folau well and, in June, Kepu spoke about his great sadness that Folau was no longer a teammate.

"Those [Pacific Island] guys are still healing, including myself," Kepu said. "There was a time there when we sort of didn’t know what was going on. Things were being said in the media and a lot was going on at the time. Everyone is finding their feet and slowly getting back into footy now everything has been dealt with.

"Guys are looking forward and RUPA [Rugby Union Players Association] are doing some stuff to try and cover all bases so if it ever does happen again that it’s all dealt with accordingly."

Kepu is playing in the UK Premiership with London Irish, while Folau is playing rugby league with Catalans in France. He settled out of court with RA and NSW for a figure believed to be about $4 million, before the case went to trial in the Federal Circuit Court.

Tags: 'No, Hooper, regrets':, responds
You may also like
Latest Posts