Green puts Wayne in the shade

We all know that Wayne Bennett is economical with words, but how about today’s effort from Paul Green?!

The Maroons coach rocked up to a scheduled media conference today where the Jai Arrow issue was sure to be a hot topic. At a time when the game needs to be talked up – Origin is a hard sell after Queensland capitulated in the opening two encounters – Green refused to take questions.

“Thanks Guys, just with regard to the Jai Arrow incident, the matter is in the relevant authorities’ hands, and hasn’t been resolved as yet,” Green said. 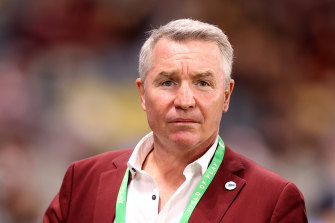 Paul Green is a man of few words.Credit:Getty

“So we won’t be making any further comment at this stage.

“Any inquiries please contact the NRL regarding that. Thanks.”

That was it. The whole thing lasted 23 seconds. If that’s not a coach struggling under pressure, I don’t know what is.

One of the most talked about players over the past 48 hours is a Souths star not playing in this encounter.

Jai Arrow has been suspended for two games, and fined $35,000, for bringing a “dancer” into Maroons camp in contravention of biosecurity protocols. When you consider he would have picked up $15,000 to participate in Origin III, it’s really a $50k hit to the hip pocket. 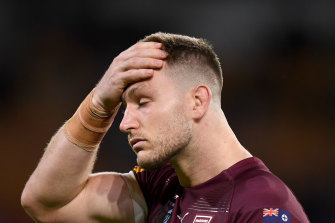 I spoke to Wayne Bennett today about the Arrow situation. He said he was comfortable with how the NRL dealt with the situation.

“I think the game has handled it really well. We’re moving on,” he said.

“Like everybody, I’m disappointed at what happened, but at the same time I’m happy enough with how the NRL and the QRL have handled it.”

There is, however, another twist in the story. While the Rabbitohs won’t further punish Arrow, the Queensland Rugby League isn’t done with the matter.

I’ve been told there is a very real chance Arrow will be suspended for next year’s Origin series.

Piggins on the march

South Sydney celebrated a very important anniversary this week; 20 years since the Federal Court delivered a verdict in favour of South Sydney. It was a huge moment in the foundation club’s battle for reinstatement to the NRL after they were kicked out in the wake of the Super League war. 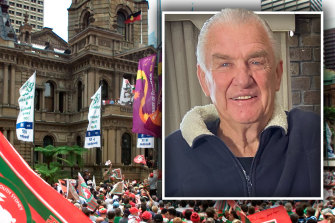 Craig Coleman, the former halfback who inspired the second march through Sydney’s Town Hall, reckons a statue of Piggins should be erected at the club’s new centre of excellence.

“The reason there is a Souths Sydney is because of George Piggins,” Coleman said.

“This was for all the people living in flats in Redfern and Waterloo. I was one of them.

“We never had much, but we had our team, we had South Sydney. When we won, we were kings for a week.

“That was the way we were brought up. To take that away from the community was wrong.

“There has to be a statue of George Piggins for every young kid who walks through those doors and wears the famous colours of South Sydney.

“George Leslie Piggins is the reason they have that opportunity.”

Here’s my story on Piggins …

We’ve got just one game this evening, South Sydney taking on North Queensland. This was originally scheduled for Homebush but has been shifted to Newcaslte, which has quickly become the centre of the sporting universe. The city hosted the latest Tim Tszyu fight, will be the destination for Origin III and will tonight witness a Rabbitohs side play without five of its interstate stars.

This is a great opportunity for some of Souths’ young guns. Blake Taaffe will wear the No.1 jersey in his first starting game, while another youngster to watch, hooker Peter Mamouzelos, will get a chance to impress off the bench. Taafe will jockey for a halves position when Adam Reynolds joins Brisbane, but will be required at fullback in a side missing Origin stars Dane Gagai, Latrell Mitchell, Cameron Murray, Damien Cook and Jai Arrow. 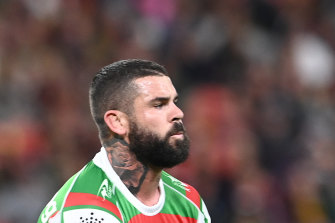 Adam Reynolds will be a key figure tonight.Credit:Getty

So light a scented, pour a glass of Malbec and strap in for what should be an intriguing encounter.