Despite fining and suspending him, the NRL integrity unit has been quietly searching for new leads and footage relating to Jai Arrow’s bubble breach on the Gold Coast, which threatened to derail Origin III. The good news is that Arrow’s COVID test has come back negative.

This comes as Blues chief adviser Greg Alexander has thrown fuel on the burning wreck that is Queensland’s Origin campaign by declaring Arrow’s bubble breach worse than the Dragons’ barbecue scandal, where 13 players gathered at Paul Vaughan’s house in contravention of NSW government public health orders and after being told not to do so by the club. 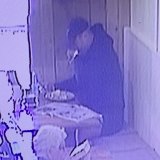 Paul Vaughan at a cafe in Wollongong.

The Dragons players at Paul Vaughan’s infamous barbecue will sign statements, not statutory declarations, saying no one from outside the club’s bubble was present. They have all been fined an additional week’s pay, and there is no question pressure has been put on the club’s decades-long relationship with St George Bank. 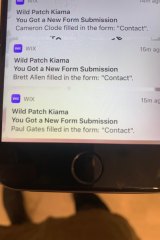 When the bank looks at its contract with the once mighty Dragons in coming weeks, which expires at the end of the year, it will raise the party as an issue.

So far, no pictures have emerged of the party, but the images accompanying this article contributed significantly to Vaughan getting sacked by the Dragons and losing his $800,000-a-year contract.

The images are of his first COVID breach at a local cafe in 2020. They show a hooded Vaughan having breakfast. That meal ended up costing him $10,000. The other image shows the sign-in tablet from the time Vaughan was at the cafe. His name does not appear.

It wasn’t the crime of the century, but it has ended up playing a key role in his recent sacking and cost him close to a $1 million when you take into account his lost income and fines.

Vaughan has been heavily criticised for hosting the party, but his sexting of a young lady has gone unquestioned. The woman did not want money or public recognition, just for Vaughan’s wife to be aware of his behaviour.

To give him some credit, Vaughan apologised for his actions. But he didn’t answer a single question about why he thought hosting a party was a good idea. He didn’t explain why the police were not told that Jack de Belin was in an upstairs bedroom. In fact, before I knew de Belin was being investigated for being at the party, I asked Dragons club bosses if he was there.

“We’ve asked questions about that,” one club official said. “We were told he was only in the vicinity because he was walking his dog; [that] he was not there.”

I had a story ready to go to print with his former coach Paul McGregor saying he deserves to be considered next year for Origin.

I was willing to give de Belin his due and report on him as a footballer; not as someone who went through a sexual assault trial, where the charges were ultimately dropped. Now his character has been questioned again. De Belin is clearly well liked at the club, but this latest incident raises a lot of questions about his ability to make good on his second chance.

At best, he will be remembered for cheating on his pregnant partner and the two years that followed. He will then be referred to as the player who hid from police for four weeks after he returned to the NRL. And, along with the other 12 players, he will be remembered as a person you may not want to bank on – something the club’s major sponsor will need to consider.

There are some people who deserve praise for their actions in the Dragons mess. At the top of the list are ARL Commission chairman Peter V’landys and NRL chief executive Andrew Abdo. It’s Abdo’s coming of age as a leader of the game. V’landys has balanced firmness and compassion.

Tireless in the background has been the game’s best investigator, Karyn Murphy. She had to sift through conflicting stories from the dim-witted Dragons in her role leading the integrity unit.

The penalties are strong and the Dragons avoided losing points only because management had advised them not to have a get-together. 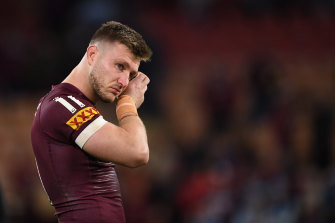 Jai Arrow was kicked out of Maroons camp this week.Credit:NRL Photos

The QRL is behind the times and living on the glory of their era of domination when Cameron Smith, Johnathan Thurston and Cooper Cronk ruled the roost.

It seems inconceivable that they mismanaged the career of Ronaldo Mulitalo so significantly and then allowed the Jai Arrow incident to happen. We exposed their drinking culture last week.

Arrow’s predicament is unfortunate on a personal level. His model girlfriend had moved to Sydney to follow his career. They have had their issues recently, but she was was at Origin I, showing they were still together then. 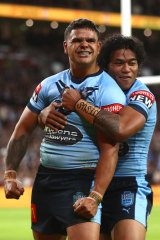 Latrell Mitchell has been superb for the Blues this series.Credit:Getty Images

Actual football took a back seat to scandals during the week, but here is an opinion worth taking note of: Greg Inglis says Latrell Mitchell looks like a Blues captain in the making.

Inglis had a brief but inspired time as Queensland skipper and thinks Mitchell has the right qualities to lead the Blues.

“The way he played the other night [in Origin II], it was quite the sight,” Inglis said. “The way he dominated – he led through his actions. He looks like a person who is moving into a place where he can captain the side in coming years.”

This column revealed recently that Mitchell is now part of the NSW leadership group, an inspired move from NSW coach Brad Fittler that has helped take Mitchell’s game to the next level.
Inglis spoke after calling it quits on his football career.

“My body has told me it’s time to finish and I’ll leave the game as a happy man,” he said. “I did everything I wanted, and yes I still like playing so you may see me play some local footy or stuff in the bush.”

There is a growing acknowledgment that 2021 will be remembered for blowout scorelines. And now we can reveal that TV networks are working on getting ahead of the game.

Channel Nine sports bosses Brent Williams and Simon Fordham know that they are in the entertainment business and changes to the Nine coverage have been noticeable this week.

“With the frequency of blowout matches growing each week we have discussed as a group how we can best prepare for these in the future,” an email to staff from the pair reads.

Future broadcasts are set to include more historical footage, interviews with coaches, players and families, and live Zoom interviews in play. Channel Nine – which is owned by Nine Entertainment, the owners of this masthead – knows adding value to the coverage is vital.

Ironically, the idiots who broke the COVID protocols saved the game from more scrutiny of the most damaging long-term threat to the game – blowout scorelines.

Last Saturday’s three games produced a combined scoreline of 148-6. But the most disturbing aspect of all is the NRL’s refusal to acknowledge its mistakes. The ARLC continues to argue that the six-again rule is not to blame. It even sent out commissioner Wayne Pearce to defend the rule changes.

Meanwhile, the close games attracted near record viewers last weekend, while the blowouts floundered. The commission needs to admit it made a mistake and wind back the rules.