Penrith Panthers v Parramatta Eels, 7.50pm Friday, BlueBet Stadium
It is impossible to ignore the fact Penrith have so many players returning who are fresh, including halfback and superstar skipper Nathan Cleary.

The Eels have hit form at the right time of year, and boast a brilliant record against their western neighbours. Big Junior Paulo and Reagan Campbell-Gillard have led the way up front, Clint Gutherson, Mitch Moses and Dylan Brown are setting the back line alight, and expect Shaun Lane to cause Liam Martin and Stephen Crichton plenty of grief. The Eels need to start fast and keep it going, something they are capable of doing with their fitness levels. Penrith, however, are in a league of their own when they are on. And Cleary and Isaah Yeo will ensure there is not an ounce of complacency. The real Penrith will be on full display in their own backyard. This could even double as the grand final preview. Panthers by 8 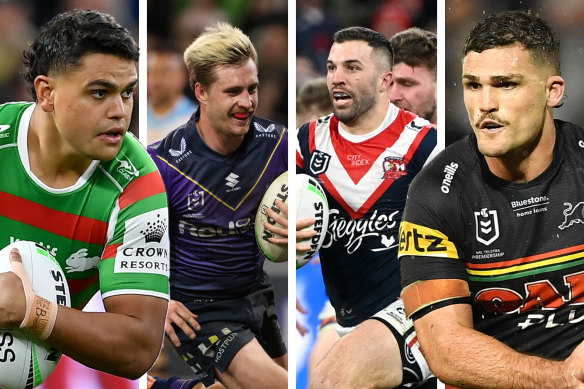 Jahrome Hughes’s fitness has massive implications on this one; the Storm are an infinitely better side with the under-rated halfback in their midst. His presence takes the defence’s focus off main man Cameron Munster while the Kiwi also ranks among the best defensive halves in the game. That’s critical considering Canberra’s favourite play of late, Jack Wighton using Hudson Young with and without the ball down the left edge. The ruck will be all important down at AAMI Park too. On form, Joe Tapine and Josh Papalii have the measure of Melbourne’s middle, but the Storm have long mastered the art of suffocating an opposition out of a finals clash. Brandon Smith and Tom Starling off the bench have the potential to break the game open for either side. If Hughes plays, Melbourne by 6.

You won’t find a single man in either 17 that hasn’t improved on last year’s efforts – hence the deserved second chance for whoever comes off second best at Pointsbet Stadium. The Sharks have been in cruise control and haven’t played a top eight team since July, but there’s enough seasoned professionals in their ranks to pick them up for a finals clash. Toby Rudolf is a strong inclusion up front, adding another big body to a front-row rotation that averages out at 113kg per man. Reuben Cotter and Reece Robson will keep them honest around the ruck, especially late in each half. There’s a struck match between the back lines, though Scott Drinkwater’s creativity is a wild card Cronulla don’t hold. Home-ground advantage is a genuine factor when it comes to the Shire, particularly for the goalkickers. It’ll be that tight. Cronulla by 4.

Play it again, Sam. The two old rivals will go at it for the second week in a row in the new Allianz Stadium after the Roosters jumped the Rabbitohs in their final round clash last week. But should we expect more of the same? There’s no Joseph Manu (calf) for the hosts, but Joseph Suaalii (shoulder) is expected to play with Daniel Tupou (groin) still under an injury cloud. Jared Waerea-Hargreaves (hamstring) and Sam Verrills didn’t finish last week’s match but should make the start line. For the Rabbitohs, all eyes on captain Cameron Murray, who needs to pass the NRL’s concussion protocols to play after reeling out of a tackle in the first minute last week. Coach Jason Demetriou and hooker Damien Cook are both back after missing last week’s game with COVID-19. It’s not unfamiliar for these two teams to meet in the last round of the regular season and first week of the finals. The Rabbitohs ended the normal rounds with a win in 2019, only to be blown away the next week. Can the Rabbitohs do the same? Latrell Mitchell won’t be as quiet again. Rabbitohs by 4

See how the Herald’s experts tipped for the first week of the finals here.