Nathan Cleary and Tyrone May will be interviewed by the NRL Integrity unit on Tuesday about the three men who crossed the Queensland border with wrongful work permits and later gained access to an area in close proximity to family and friends of the Panthers on grand final night at Suncorp Stadium.

The housemates will be probed after Penrith legend Greg Alexander told a couple of the players to “pull their heads in” for a few social media posts during the week-long premiership celebrations.

While he never named names during the interview on SEN Radio, Alexander was understood to be mainly referring to May who posted lyrics from Canadian rapper Drake under a photo of himself leaving court last year, painting himself as the victim from the sex-tape scandal that rocked the game and his club in 2019.

May pleaded guilty to four counts of intentionally recording an intimate image without consent with the magistrate telling him during sentencing that he was lucky to not go to jail.

“There have been a couple of social media things that haven’t impressed me,” Alexander said. 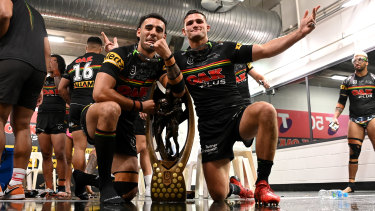 Nathan Cleary and Tyrone May will be interviewed by the NRL integrity unit.Credit:NRL Photos

“I think a couple of our players need to pull their heads in after what they’ve posted on social media. It gets a bit out of control. I don’t follow social media.

“I’ve had people tell me about what’s been posted, and some of it shouldn’t have been. It was a bit out of line.”

When later contacted by the Herald, Alexander said he had no issues with Viliame Kikau, who mocked Penrith’s grand final rivals with a “glory glory to South Sydney” post, nor was he upset by the players “accidentally” damaging the Provan Summons trophy.

“They were having fun and it was an accident – I still remember ‘Loz’ [Laurie Daley] dropping the trophy off the back of a ute 31 years ago,” Alexander said.

The integrity unit want to know how the three men, who were fined $4135 by Queensland Police for their border breach, had gained access to an area at Suncorp Stadium so close to the players’ friends and families.

There is no suggestion Cleary or May knew the men had breached public health orders by entering Queensland, or that they would be at the grand final.

The Penrith No.7 is due to undergo shoulder surgery on Wednesday.

The Panthers have remained in the headlines for several reasons since their breakthrough premiership, and co-captain Isaah Yeo defended the huge amount of online celebratory content when he told the Herald on the weekend: “I wouldn’t spray another team for doing the same thing. Had we not won, the same people would be spraying us over social media saying we can’t win the big games.”

Meanwhile, Canberra have signed No.7 Jamal Fogarty from the Titans, with Raiders coach Ricky Stuart delighted to have him on board and joking: “Now I’m not the only halfback at the club who has been run down by a front-rower.”

Fogarty is well known by Raiders fans as the Titans player who was ankle tapped by prop Josh Papalii in a game last year, with the inspirational chase later commemorated on a limited-edition pair of Budgy Smugglers.

“I’ve been talking about that moment for more than 12 months – it’s part of my DNA now,” Fogarty told the Herald, after signing a three-year deal.

“My wife messaged Budgy Smugglers and they sent me a couple of pairs. Josh has the 40-inch waistline who he ran down a bloke with a 32-inch waistline. It’s not something you see every day.”

Fogarty asked to negotiate with rival clubs after it became clear the Titans wanted Toby Sexton as their starting halfback. He was told the only club he would deal with were the Raiders, and he was keen to work with Stuart, the man still regarded as the greatest Canberra No.7.

Tags: Integrity, intervie, NRL, to, Unit
You may also like
Latest Posts