The possibility of the NRL owning a stake in Sydney’s major stadiums has been floated in a bid to finally resolve the impasse over the location of the grand final and the state’s sporting infrastructure needs.

The issue has come to a head after the NRL threatened to take the decider out of the harbour city after the NSW Government failed to fulfil its commitment to turn Stadium Australia into a permanent rectangular facility. League powerbrokers want those funds redirected towards the upgrading of suburban venues in order to salvage a deal that would result in the grand final remaining in Sydney until 2042.

The government hasn’t ruled out putting a roof on Accor Stadium, a move that would waterproof the venue for concerts and increase the city’s chances of winning the hosting rights to the 2027 Rugby World Cup final and the 2034 FIFA World Cup as well.

The Sun-Herald can reveal that some officials in government circles have discussed the prospect of allowing the NRL to take an equity stake in one or more venues, including Accor and the soon-to-be-completed Sydney Football Stadium.

It is hoped the move could convince the NRL to back the roof proposal and end speculation that league’s showpiece event could be on the move.

The NRL doesn’t currently own a single asset, a shortcoming that could have left the game exposed during the pandemic had costs not been significantly cut. It is a situation the governing body wants to address in order to future-proof the game should any other unforeseen challenges arise. 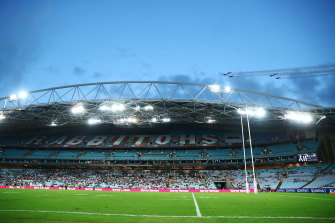 The NRL is considering taking an equity stake in Accor Stadium.Credit:Getty

The AFL bought Marvel Stadium in 2016 on a deal reportedly worth $200 million, an investment that helped to secure a $600 million line of credit from Australian banks to provide emergency funds during the lockdown. If the NRL was to do likewise in Sydney, it would be for a percentage stake rather than outright ownership.

If the government and the NRL can’t come to an agreement, the grand final could leave the Harbour City for just the second time in history. Last year the Penrith-South Sydney decider was staged at Suncorp Stadium after the competition relocated to Queensland due to COVID-19.

The NRL has flagged the possibility of allowing cities to bid for the property – valued at about $10 million – that would see it hosted across the country much like the Super Bowl rotational system in the NFL.

Under the previous administration, the NRL wanted to follow the AFL model by hosting the majority of its games at one or two large venues. However, there has been a change of tack with powerbrokers pushing for suburban grounds to receive funding to improve the game-day experience and promote tribalism.