With the District Court criminal trial of Jack de Belin and his co-accused ending this week with a hung jury, it’s entirely reasonable that questions be asked about the continued application of the NRL’s contentious no-fault stand-down policy.

Jack de Belin won’t face a retrial until the second week of April. Consequently, excellent questions arise as to whether it remains proper and appropriate that he remain prohibited from playing rugby league at the elite level. 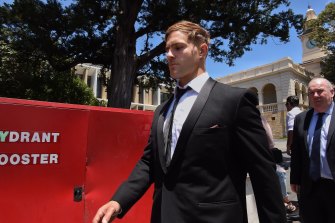 Section 141 of the Evidence Act in NSW roots in statute the principle that a court exercising criminal jurisdiction mustn’t find any prosecution case proved, unless the court is satisfied that the prosecution has proved its case beyond reasonable doubt. Unless the prosecution can discharge this rightly heavy evidentiary burden, a person’s innocence of any criminal wrongdoing is preserved without any denigration.

It’s a hackneyed observation, that not a single thing which has happened up to this point detracts from the basic point that de Belin, and his co-accused, are presumed innocent of any criminal wrongdoing.

A long list of authoritative decisions of the High Court of Australia have persistently, and purposely, refused to wrap any further definitions, guidance notes or commentary around exactly what is meant by the words “beyond reasonable doubt”, other than to say that what’s a reasonable doubt isn’t confined to what’s a rational doubt, or even doubt founded only on a bedrock of reason. The words; they mean what they say.

At Jack de Belin’s retrial he isn’t required to prove, nor even say, anything; importantly, he has and enjoys the unmitigated benefit of doubt. Conversely, it’s the duty and responsibility of the Crown to prove criminal guilt, and in the absence of such proof beyond a reasonable doubt, the prosecution must always fail to make out its case. In any such circumstances, an accused person is entitled to an acquittal, with his (or her) innocence preserved, and intact.

'The rules before the no-fault stand-down provisions were introduced skewed materially in favour of players and their right to play.'

It’s this very principle of innocence in the absence of proven guilt that is – to quote from the seminal UK House of Lords decision delivered by Viscount Sankey in 1935 – the “golden thread” of the criminal law, that’s always seen. That presumption of innocence is a cardinal principle of the system of justice in Australia. The principle is strict and immutable, and correctly so where matters of wrongful deprivation of liberty, and other grave injustices, are the consequence of any system more relaxed.

Therefore, unless and until at some future point it’s actually adjudged in court that the criminal charges levelled against de Belin are proved by the prosecution beyond a reasonable doubt he is, and remains, an innocent man.

But now, let’s return to the issue raised by de Belin’s counsel – a question of the reasonableness of the continued, concrete application of the NRL’s “no fault stand down” rule. Considering de Belin’s presumed innocence and the long path to justice that’s otherwise going to result in de Belin missing his third season opener in a row, should any relaxation of the strictness of the NRL’s rules be applied in the circumstances?

That de Belin was prohibited from playing in early 2019, under the NRL’s strengthened rules, has no effect in eroding his presumed innocence. That he then lost a Federal Court challenge, concerning the actual legality of those same rules, likewise doesn’t displace the fact that he is an innocent man.
It’s also noted that de Belin’s management team has foreshadowed the prospect of sitting down with the NRL, presumably for the purpose of exploring the prospect of whether the NRL’s rules might somehow be relaxed, given the procedural history of the case against the player. One suspects that conversation will be short, for the reasons that follow. 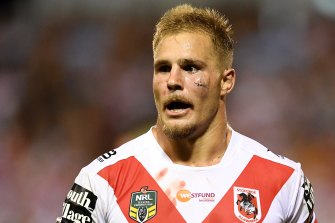 Jack de Belin has not played for the Dragons since 2018.Credit:NRL Photos

Basically, the NRL’s rule is relevantly written in such a way so that there’s actually no decisions which the NRL can, or is even able to take, about when the rule is activated for serious criminal matters. In cases criminal charges against players, which are as serious as those faced by de Belin, the NRL’s rule that operates to stand down the player triggers as an automatic guillotine. There’s no discretion for anyone to exercise.

The rule also says two important things. First, in cases where that guillotine drops without the NRL enjoying the discretion to activate it, the player has no right of appeal or review. Second, the rule expressly states that the automatically-imposed stand down is to remain in force until such time as the relevant criminal charges are either “determined”, or “withdrawn”.

As matters do stand, neither of those thresholds of finality have been reached; the NRL actually has no discretion in its own rules to relax its rules, nor decide that they won’t apply because of the procedural delays and the requirement for a retrial. Put another way, the NRL is hamstrung; unless it moves to change its own rules, there’s no prospect of that transpiring.

But what of the residual theoretical argument, that the NRL somehow should change its rules? Frankly, the rules in place in 2018 before the no-fault stand-down provisions were introduced, dealt with these sorts of serious matters in a manner skewed materially in favour of players and their continued right to play. That same system operated to the wicked detriment of the sport, the NRL’s good public name, and its various commercial interests.

Notwithstanding the potential for unfairness in the present case – and anyway, the rules aren’t about offering fairness to one affected individual – it must remain the case that the rules operate as currently in force. NRL players – who are charged with serious crimes involving violence, sex and female victims – must be automatically excluded from participation in the sport without judgment, pending the final outcome of the criminal proceedings.

And if you’re against me on that stance, explain to me what should be the outcome, if an NRL player is somehow allowed out on bail after being charged with murder? Should that player be allowed to play, until he faces a jury of his peers? Of course not.

But if those criminal proceedings involving that player meander on for years and then there’s a mistrial, what should the response of the game then be?

Tags: are, bel, De, hands, NRL's, on, tied
You may also like
Latest Posts