Of all the pearls of wisdom Phil Gould has imparted to Brad Fittler over the decades, we wonder if he’s told him a personal favourite: “Only the paranoid survive”.

Gould is one of the most paranoid people I’ve ever known, closely followed by Ricky Stuart and the late Bob Fulton, who still scares me a little even though we lost the Manly legend last year.

Once asked by a reporter if he was indeed paranoid, Stuart fired back: “No, I’m not … Who said that?”

Paranoia comes in many guises in rugby league, but it mostly concerns referees.

In his day job as commentator for Channel Nine, Fittler has defended match officials like a human shield. As NSW coach, he’s become concerned about their influence on the result.

He could barely hide his displeasure about referee Ashley Klein after the 16-10 loss to Queensland in Origin I in Sydney this month.

It can be revealed today just how concerned he was, going so far to approach NRL referees boss Jared Maxwell weeks before the match.

It’s not uncommon for coaches to approach head office highlighting areas of concern, although it is unusual to do so before the first match of an Origin series.

At least one part of Fittler’s concerns came true: the Maroons’ kick pressure on Cleary walked the finest of lines. On three occasions, penalties could have been given but weren’t. 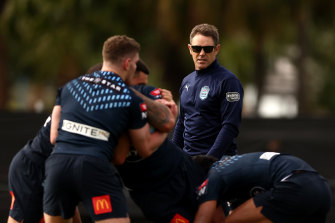 When Fittler spoke to Maxwell a few days after the loss, he complained about the late hits on Cleary, as well as prop Junior Paulo being held in the scrum as Queensland halfback Daly Cherry-Evans ran in a critical try early in the second half.

Maxwell listened but conceded little while Fittler left unimpressed, and you can bet it will form a large part of the Blues’ approach for game two at Optus Stadium in Perth on Sunday night.

In other words, if NSW are to win this series, they will have to do with everything against them — in their minds at least. It’s classic siege mentality, straight out of the Queensland playbook.

It’s a different tack to previous years under Fittler.

The Blues are usually at their best when they’re front-runners, revelling in getting points early before the likes of Tom Trboejvic and Latrell Mitchell score tries at will.

With those two Ferraris parked in the garage because of injury and COVID-19, and now down a match in the series, NSW will need to fight and scrap and test the referee’s patience, as the Maroons did in Sydney.

NSW captain James Tedesco telegraphed the sentiment last week when he told the Herald he’d have to channel his “inner Cameron Smith” and manipulate the referee.

“I think I might have to,” Tedesco said. “[Klein] didn’t give a penalty for 60 minutes [in Origin I]. He was just letting the game flow, but you can’t just let them lay all over you.”

This is Fittler’s toughest ask since becoming coach in 2018.

His methods and selections are being rubbished like never before, which is strange for a man who has won three of the past four series and lost just five matches in total.

Two of those matches were dead rubbers while the margin in all of them was less than a converted try with the Blues on the attack, pressing the Queensland line as time expired.

Fittler was big enough to admit after the 2020 series loss that he had been “out-coached” by Wayne Bennett and, deep down, you suspect he might feel the same about the Queensland trio of Billy Slater, Cameron Smith and Johnathan Thurston in game one.

Since making seven changes to the squad beaten in Sydney, Fittler has been accused of “panicking”.

The truth is he’s picked a side capable of levelling the series.

Bulldogs star Matt Burton will play at left centre but provides a second kicking option for Cleary, deploying spiralling bombs like the ones that terrorised the Wests Tigers’ back three on Sunday.

Penrith Api Koroisau provides the one-two punch with Damien Cook that Ben Hunt and Grant provided Queensland in game one. It won’t surprise if he starts the match.

Fittler is big enough to concede he got it wrong in overlooking Jake Trbojevic for game one and the Sea Eagles middle forward will now most likely start.

Angus Crichton and Siosifa Talakai are the risky selections. Crichton has been in patchy form for the Roosters while Talakai must make the rather large step from the NRL to Origin football, which was played at a feverish pace in game one.

The one selection NSW can’t control is the referee. There’s every chance Klein will be handed the whistle for game two with an announcement expected on Tuesday.

It will be a concern for NSW fans if Fittler allows too much headspace to the officials.

Only the paranoid survive — but they only survive if they win.

Watch the State of Origin exclusively live and free on Channel 9 and 9Now.