Wayne Bennett has defended resting more than $5m worth of talent this weekend and said there was no need to follow the AFL model and introduce a bye round before the NRL finals.

South Sydney will give eight players the weekend off, including Adam Reynolds, Cody Walker, Damien Cook, Cameron Murray and Jai Arrow. Parramatta did likewise with Clint Gutherson, Mitchell Moses, Dylan Brown and Nathan Brown, while Cameron Munster and Christian Welch are among the large list of representative players to be given a freshen-up by the Storm.

The TV networks and fans who make their way to the Queensland venues this weekend will be upset they do not get to see some of the game’s household names in action.

It raises the question of whether the NRL should follow the AFL, who introduced a bye round before the play-offs to stop finals-bound clubs resting players in large numbers.

The NRL have previously tried to address the matter by proposing a Wildcard Weekend, which would involve the seventh and eighth-placed teams playing against ninth and tenth, but more importantly gave the top-six clubs a week to recover.

Bennett was not a fan of a pre-finals bye and said clubs sitting high on the ladder deserved the right to let a few of their players put their feet up. 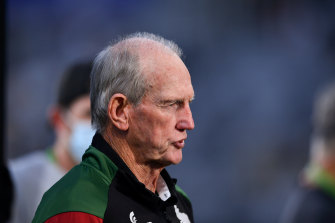 Wayne Bennett has defended resting more than $5m worth of talent in the final round.Credit:NRL Photos

“I think a bye would only extend the season, and people just want to see football – nobody enjoys not watching football,” Bennett told the Herald.

“I think fans will be excited to see some of the kids play. They will get to see the future. Clubs need to be in a strong position to do it. Fans want to see what they don’t get to see every week. And for one week it doesn’t hurt.

“I haven’t used it too often in my coaching career, but I’ve got an opportunity to do it now. I’ve done it before. Last year we made the top six and had injuries everywhere and had to win our last game.” 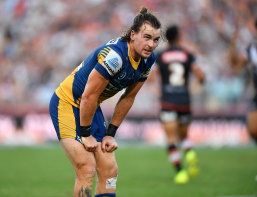 Eels skipper Clint Gutherson is another star player to be given a spell this weekend.Credit:NRL Photos

Even if Souths were in the running for the minor premiership, Bennett said he would not baulk at giving a player a rest.

“Sometimes you make a decision about which trophy you want,” Bennett said. “If people have some niggles you don’t play them. It might mean you miss out on the minor premiership but if they’re fitter for the finals series you’ll take that.”

That was Parramatta coach’s Brad Arthur philosophy who preferred to hit the finals full of running with a fresh side rather than go all out for a top-four finish.

NRL chief executive Andrew Abdo said there was no need to explore the AFL model and the competition was already “long and tough”.

“Roster management and strategy are all part of the season and clubs have autonomy on that,” Abdo said. “If you rest one or two players, it doesn’t mean the teams aren’t playing to win or won’t be competitive. There is still a lot on the line this weekend.”

Long-serving Storm football manager Frank Ponissi said if there was a bye, you risked having a week off, playing in week one of the finals and then having another week off, which was far from ideal.

Ponissi said some of the club’s players, including Jahrome Hughes, wanted to keep playing leading into September.

Penrith have named their strongest side for the Eels game, as have Manly who can nail down fourth spot with a win over North Queensland.

Tags: Benne, doesn't, hurt':, one, Week
You may also like
Latest Posts