Scott Pendlebury has seldom chosen the wrong option in the course of his 334 games, but he committed an awful and damaging clanger on the weekend when he invited opposition clubs to make their pitch for his services.

In essence, Pendlebury said that Collingwood had made him a one-year contract offer and that he wished to remain a one-club player. But he added, with almost carefree nonchalance, that if clubs wanted to offer him coaching gigs “for a couple of years’ time, I’ll have a look at it”.

Pendlebury might think his comments on Triple M were innocuous and not comprehend why they’ve caused such a kerfuffle, noting that he did say he wanted to remain with Collingwood, as he very likely will do. 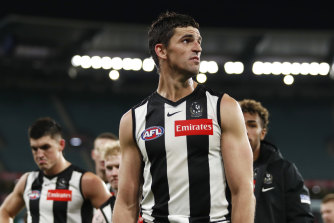 Scott Pendlebury caused a stir when he said he was open to offers, including coaching. Credit:Getty Images

Usually an exceptional reader of the play, he’s completely misread the situation here.
Collingwood is in strife. The Magpies are without a coach, with a board that faces a potential challenge and have just finished second last, having parted, for various reasons, with Eddie McGuire and Nathan Buckley and embarked on a forced rebuild after mismanaging their salary cap.

Pendlebury is still the Collingwood captain. As the team struggles, in the face of a transition and rapid descent, his responsibility to the club has only been magnified.

Yet, inexplicably, he’s chosen to air his wish for what sounded like a Sam Mitchell-style (at West Coast) coaching gig that – we presume, he didn’t really spell it out properly – would mean play first, then coach somewhere.

One of Pendlebury’s defining traits as a footballer has been reassurance that he gives to teammates and to every Collingwood person – from the coaches and young players to the most deranged fans in the Ponsford Stand.

His invitation for clubs to make a pitch, however, can only add to the uncertainty and unease at Collingwood.

Bob Murphy, the former Bulldogs skipper who won so many hearts through his graceful acceptance of his misfortune in missing the 2016 flag, is not an ex-footballer apt to line up current players without just cause.

But Murphy was both surprised and dismayed by Pendlebury’s willingness to put himself out to tender, calling his public pitch “a pox”, and suggested that the captain had not shown leadership when his club badly needed him.

“This notion of ‘put a package to me now’ whilst his club sits second last on the ladder, and he’s the captain, no, that’s pox. For me, that’s pox,” Murphy said on his SEN radio program on Monday.

“He is the only real visible leader we have at Collingwood. He stands for a lot at Collingwood right now and that young group who’s been through a terrible year.

“He is their leader, and he seems to be more about drawing up a package of what’s best for him. Or is it a facade to put out there to drive the price up?

“Either way, it just doesn’t sit well with me.”

Murphy quoted Sydney’s Svengali former skipper, Brett Kirk, on the definition of leadership. “He said it is to be disciplined, lead by example, and when the shit hits the fan, you’re up to it to your knees.

“At Collingwood, the shit has hit the fan … I was really underwhelmed by it.”

The defence for Pendlebury rests on the view that AFL clubs, such as Collingwood, are brutal in discarding older players – as innumerable champions (see Hawthorn’s shove to Mitchell, Luke Hodge, et al) have found.

In a cut-throat competition, the argument goes, why shouldn’t Pendles consider his options and maximise his opportunities to either extend his playing career, or further his coaching ambitions?
Well, the issue is one of timing. Pendlebury has been offered a deal by the Magpies. Collingwood’s number 10 did not need to go public with his tender at a time when, as Murphy suggested, they are knee-deep in number two.

Would Joel Selwood have put himself out there in that fashion? It’s hard to imagine.

Pendlebury, as a gifted junior basketballer player, is a devotee of the NBA and well knows the contours of American professional sports, in which “franchise” players such as LeBron James call the shots and make very self-focused, unsentimental decisions on where their best career prospects lie, weighing up their next contract like a hedge fund manager.

Perhaps Pendlebury’s comments are merely a reflection of how those American values are influencing the once quaint local game.

He’s entitled to explore his options, of course. In due course, the clubs will come knocking for him to become an assistant coach.

Right now, however, the Collingwood Football Club is in a heap of bother. Pendlebury, normally so composed when all around him are flustered, has fumbled this time.

Tags: a, bad, look, Pendlebury’s, Pitch
You may also like
Latest Posts

Cowboys’ Neal tests positive, out for MNF at least