Under fire Waratahs coach Rob Penney has dropped new Kiwi recruit Jack Whetton and promising hooker Tom Horton to the bench for Friday’s crucial clash against the Western Force as well as moving regular fullback Jack Maddocks to the wing.

The injury toll continues to mount for NSW as well, with three-Test Wallaby Angus Bell sidelined due to an ankle injury he picked up in Saturday’s demoralising 61-10 defeat to the Brumbies. 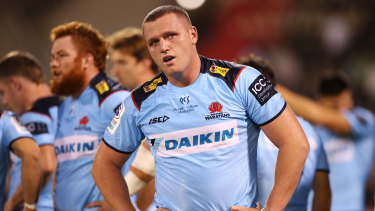 Waratahs prop Angus Bell suffered an ankle injury in the huge loss to the Brumbies. Credit:Getty

The Waratahs are coming off their heaviest defeats to both the Reds and Brumbies in 26 seasons of Super Rugby.

While Penney said immediately after the match it was not worthwhile “whipping a dog when it’s down”, he ran a forthright review session for a team desperate to get their campaign off the ground following 34- and 51-point losses.

“We did cop a spray deservingly, yes, and it’s so that we can better,” winger James Ramm said. “Sometimes you have to be tough on each other.”

NSW No.12 Tepai Moeroa added: “He was stern on Monday. If you leak 60 points, you deserve a spray. I’m sure that hit the boys deep and it should be a different result this week.”

Penney’s position as head coach could come under threat if the Waratahs lose to the Force, who have not won any of their nine Super Rugby AU matches since returning to the competition last year.

The Waratahs coach has made five positional changes for the match at Bankwest Stadium.

Tetera Faulkner replaces Bell, the team’s loose-head prop, who is expected to return after the bye next week after limping off GIO Stadium on Saturday night.

David Porecki has been promoted to the starting team at hooker, while Hugh Sinclair takes the place of Whetton, who is yet to produce his best form in his two outings in a sky blue jersey.

While Moeroa and Alex Newsome remain in the centres, Penney has decided to switch Mark Nawaqanitawase and Maddocks by putting the latter on the wing. Nawaqanitawase has been known more as winger but also trains at fullback.

Fresh off a bye following their 27-11 loss to the Brumbies, the Force will go into the match as slight favourites, having named a strong team featuring new captain Brynard Stander.

Regular skipper Ian Prior has been dropped to the bench in place of Tomas Cubelli, while Jono Lance is also out of the 23, with Jake McIntyre set to wear the No.10 jersey.

“To have this two weeks in a row, with multiple points put on you, it’s a lot of learning in two weeks, especially for this young group,” Ramm said.

“We can’t play down the Force at all, they’re a really good team, and we need to show up and make sure that we can bounce back. A lot of pressure will probably be off us [if we win].”

Tags: changes, for, must, Penney, rings
You may also like
Latest Posts